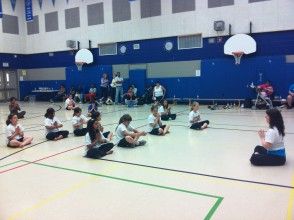 This year, a North San Diego County school district roiled some Californians with concerns that its yoga program was too religious. As similar programs have spread around the country, yoga’s Hindu origins have raised questions about its compatibility with public school instruction.

But the nine schools in the Encinitas district had carried on the practice for years without much incident. “Encinitas introduced yoga as a pilot program to one of its nine elementary schools in 2011, resulting in just 40 to 45 of the 5,000 students being pulled out of the class by their parents,” Jurist reported[3]. “Yoga is taught in many other schools in the U.S., but the Encinitas Union School District is reportedly the first of the school districts to offer classes on a full-time basis.”

As the Associated Press noted[4], the courses received three years worth of funding through the K.P. Jois Foundation[5], “a nonprofit group that promotes Ashtanga yoga” and “provides twice-weekly, 30-minute classes” at Encinitas schools.

Although both traditionally-minded Christians and strict secularists alike have been wary, the courts didn’t put much stock in plaintiff’s fears that yoga plunged students into inappropriate spiritual situations. Stephen Sedlock “said he became worried after reading an article that suggested yoga may not be safe for children,” according[6] to NBC Los Angeles. “His wife, Jennifer, said the yoga program went against the first and second commandment of the Bible, which dictate ‘I am the Lord your God,’ and ‘you shall have no other gods before me.'”

The three-judge panel on California’s 4th District Court of Appeal disagreed. Located in San Diego, the panel unanimously denied that the state constitution’s religious freedom clause — seen as broader than the U.S. Constitution’s — barred instruction in yoga- and yoga-like poses.

“The record in this case contains abundant evidence that contemporary yoga is commonly practiced in the United States for reasons that are entirely distinct from religious ideology,” the panel ruled[7].

In its defense, Encinitas was helped by the courses’ focus on physicality alone — and their strictly optional[8] nature. But court records showed that the school district labored[9] carefully in order to craft an approach to yoga that satisfied standards at the level of the constitutional, the state school system and parents themselves:

“The district hired its own expert to write a curriculum that conformed to California’s physical education standards. The district’s program focused on yoga poses, breathing, and relaxation, as well as helping instill such character traits as empathy and respect.

“After some initial parent complaints that the program was religious, the district made changes, such as removing Sanskrit and images of India, and renaming some positions (such as changing the ‘lotus’ position to ‘criss-cross applesauce.’)”

Although the language of California’s religious freedom protection differs from that in the federal Bill of Rights, state constitutional law has looked to Supreme Court jurisprudence in determining the merit of claims bearing on relevant claims. As a result, the court in the Sedlocks’ case looked to the so-called Lemon test, named for a landmark Supreme Court ruling handed down in 1971.

The Lemon test set up a three-part standard to give a contested program legitimacy. Then-Chief Justice Warren Burger formulated[10] the standard:

“First, the statute must have a secular legislative purpose; second, its principal or primary effect must be one that neither advances nor inhibits religion; finally, the statute must not foster “an excessive government entanglement with religion.”

The use of the Lemon test has not always been consistent, and the court has come under fire from analysts who have described[11] it as an exercise in judicial activism. But in the Encinitas case, it contributed to a ruling that will likely hold. The Sedlocks were reportedly considering their options as to how to proceed, but no announcement of an appeal has been made.