Faced with a restive constituency disgruntled by drought, Gov. Jerry Brown has moved to execute on his plans for California infrastructure — a boon to labor unions, but a point of contention for his political adversaries.

As the Los Angeles Times reported[1], trade workers will benefit from Brown’s aims to refurbish roads and replumb the state’s waterworks. But most of all, they’ll cash in on the construction of California’s high-speed railway, under increasing fire as a misplaced priority amid the water crisis:

“The $68 billion bullet train project has been besieged by lawsuits, construction delays, uncertain funding and lackluster popular support. But the building trades have remained its most tenacious supporters, arm-twisting for key votes in the Capitol to move the project along and shelling out for billboards extolling high-speed rail, which will be built solely by union labor.” 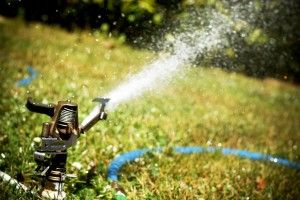 [2]Some state transportation measures have responded directly to the drought. Caltrans, for instance, has recently switched to smart sprinklers designed to halve water use. In a statement, director Malcolm Doughtery touted[3] other gains. “Caltrans districts have significantly curbed irrigation, modernized equipment and halted many landscaping projects across California,” he said. “These efforts have saved billions of gallons of water, but as this State of Emergency continues in California, we must work even harder — and keep leading the way on this critical issue.”

In crafting his polarizing approach to transportation and infrastructure, however, Brown did not anticipate the scope of today’s water-related complications. For years, Brown has enjoyed commanding support statewide. Now, the compounding crisis in California water resources has put his priorities and projects in a harsher light than he has been accustomed to. Supporters have argued[4] that, in the long run, the train will end up a net plus for water conservation. Polls, meanwhile, showed statewide opposition to the bullet train has outpaced[5] support.

But the questions facing Brown’s policies have now extended well beyond high-speed rail.

A chorus of criticism

In recent weeks, especially in Southern California, critics have questioned Brown’s infrastructure priorities in light of the ongoing drought. In a recent roundup of reader letters, the Los Angeles Times observed[6] that “development and the high-speed rail project have always been targets for our letter writers. But with California’s water crisis in focus, they’re using the drought to add some urgency to their arguments.”

Analysts, meanwhile, pointed out the limits of Brown’s current water policies. In an editorial, the Orange County Register singled out dam construction and desalination for acceleration. “Although flawed,” the editorial argued[7], “Proposition 1, the $7.1 billion water bond voters passed last November and which we endorsed, finally addressed the problem. But it will take a decade to build its projects. And more is needed.” Calling the permitting process for desalination plants “a type of water torture,” the editorial warned that current projects have been delayed for as many as 15 years by bureaucratic hurdles.

The discomfort with Brown’s handling of the drought has helped rekindle Republican hopes for advancing their own legislative agenda.

While seeking to attract enough support among Democrats to ensure their plans are viable, Republicans have not been timid in striking a contrast with leading members of the opposite party. In an op-ed published in the Modesto Bee, state Sen. Anthony Cannella, R-Ceres, asserted that Brown and Assembly Speaker Toni Atkins, D-San Diego, have offered tax-laden half-measures.

“Atkins’ plan correctly seeks to rededicate this funding stream to our roads, highways, and bridges, but she also proposes to divert a new tax to the general fund to backfill the payments,” he wrote[8]. “Her proposed ‘road user charge,’ which is yet to be fully defined, would generate $1.8 billion. But only $800 million would go toward transportation projects. It’s time to end these budget tactics and commit to reducing the nearly $60 billion in deferred transportation maintenance.”

One thing the drought has not changed, however, is the ultimate Republican goal of derailing Brown’s high-speed rail endeavor.