Faced with mounting criticism over civil liberties abuses, lawmakers in Sacramento greenlit a so-called clarification of Californians’ right to videotape and photograph police officers on the job. 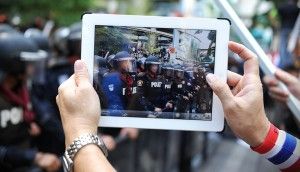 [2]According[3] to the bill’s language, “the fact that a person takes a photograph or makes an audio or video recording of an executive officer, while the officer is in a public place or the person taking the photograph or making the recording is in a place he or she has the right to be, is not, in and of itself, a violation[.]”

What’s more, Lara’s bill set out that photographing or videotaping police in that matter would not “constitute reasonable suspicion to detain the person or probable cause to arrest the person.”

Passing 31-3 in the state Senate, SB411 headed to the Assembly, setting up California to become a possible trendsetter in the way citizen monitoring of police could be treated. Currently, no national consensus has formed around the issue, leaving legislative momentum up for grabs at the state level.

Although settled constitutional law has recognized both a right to videotape and a right to prevent interference with policing, widespread departures from that standard have prompted state lawmakers to intervene. In Colorado, for instance, a recent bill “proposed making it a crime for police to stop citizens from filming,” as the Daily Beast observed[4].

But, across the country, pieces of legislation have run into trouble regardless of which side of the debate they favor. In Connecticut, for instance, a bill permitting “lawsuits against police officers who interfere with those photographing or videotaping them during the performance of their duties was blocked Monday by Republicans in the judiciary committee,” according[5] to the Hartford Courant.

Dallas-area House representative Jason Villalba introduced HB 2918, which would make it a misdemeanor to photograph police within 25 feet — raising serious concerns that the bill, if passed, would violate the First Amendment and prevent individuals from holding police accountable. For Texans legally carrying a firearm, the buffer zone required would be 100 feet under Villalba’s proposal.

As Calwatchdog.com previously reported, Sacramento has labored to keep up with changing technology, police tactics and public opinion. In January, several Democratic lawmakers introduced[7] legislation around the use of on-cop bodycams. By videotaping situations police entered into, the logic ran, misconduct would decrease at the same time that police gained clear evidence of proper conduct that could help prevent lawsuits or help resolve them to the departments’ benefit. 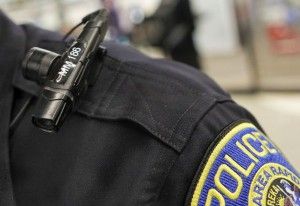 [8]Attorney General Kamala Harris, for her part, has long considered police abuses to be an important part of her political and legal agenda — a stance that could gain prominence as her bid to replace Sen. Barbara Boxer draws more potent challengers.

Despite widespread support for bodycams among Democrats, along with many libertarians and some Republicans, the policy has attracted its share of problems. In Los Angeles, where Democratic Mayor Eric Garcetti blazed a path toward standardizing the equipment, concern has persisted[9] over the use of cloud storage, as Southern California Public Radio reported:

“Los Angeles Mayor Eric Garcetti will present this month his proposed city budget for the coming year. It’s expected to include money for body cameras for all Los Angeles Police Department officers. But some security analysts argue the LAPD’s plan to store body camera video in the cloud could make the images more vulnerable to attack than if the department placed them on its local servers.”

As yet, the question of cloud storage for recordings of police has not yet threatened to stall the progress of SB411  in Sacramento.