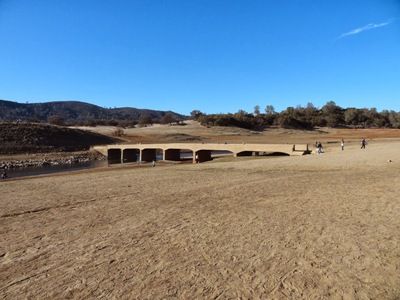 But a California-based journalist who specializes [3]in science reporting based on hard evidence — Hank Campbell, author of “Science Left Behind” and founder of the popular Science 2.0 website[4] — takes a broader view based on the last 50 years of state governance.

In an essay [5]titled “California Government Is The Big Water Management Problem,” featured on the Real Clear Science site, Campbell notes that ….

… much of the fresh water that California has runs into the Pacific Ocean. You might wonder why the Pacific Ocean needs so much, since 96 percent of Earth’s water is already in oceans, but the oceans are not asking for it. Instead, it is due to anti-science policies lobbied for by well-heeled California environmentalists.

Environmental regulations mandate that water that would sustain 4.4 million families gets flushed this way[6], regardless of drought conditions (however, farmers do get penalized during a drought, the environment must come before food). Meanwhile, Governor Jerry Brown just now got around to mandating water conservation among his wealthiest and most loyal voters. It had to be mandated because the wealthy are not conserving anything[7] the way the more agricultural sections of California have been doing for two years. …

[If] we cared about the actual problem — having enough water in good times and bad — the situation would be easy to resolve. For example, enough water to sustain 2.6 million California families was dumped into the ocean because there isn’t enough storage capacity in the north of the state and environmental rules limit the amount of water that can be pumped to reservoirs in the south.

An intentional effort to not prepare for drought

Campbell notes that this isn’t just a failure of government foresight. He says this inaction was the goal of powerful interests.

Why not allow more water to be stored in the south or build more reservoirs in the north instead of dumping fresh water into the ocean? Californians know water is important, we have agreed to water bonds totaling $22 billion in recent years, but the money has ended up going to environmental projects rather than things that help the people paying interest on those bonds.

Most of California is actually desert, the green parts are all watered to be that way, and we know droughts will happen — this is the fourth one in 50 years — so it would make sense to store more water, a literal anti-rainy day plan. But environmentalists block all efforts to create more reservoirs even though we know this sort of thing has always happened and will continue to happen. ….

The common denominators in our water problem are a lack of snow and lawsuit-driven, rather than science-driven, environmentalism. We can only fix one of those.

California environmentalists have also been the biggest opponents of a soon-to-open desalination plant in Carlsbad and one proposed for Huntington Beach. They say it is because of legitimate concerns about effects on fish, ocean water quality and the coastline.

Defenders of desalination efforts, such as former state Sen. Mark Wyland, R-Carlsbad, say that many greens’ real long-term goal is blocking growth or making it more difficult. Constricting water supplies could be seen as a tactic toward that end.