Gov. Jerry Brown and state schools chief Tom Torlakson have made plain for years they want no part of the education reform agenda touted by President Obama and think tanks backed by Bill Gates. The state has not pursued federal Race to the Top funds, which were meant to incentivize grant recipients to measure teacher effectiveness. Most school districts effectively ignore the Stull Act — a 1971 state law requiring that student progress be part of teacher performance evaluations — and face no push-back from the governor or Torlakson. 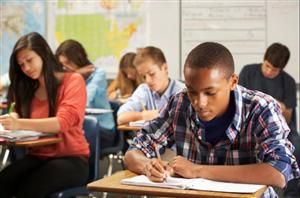 Now the Legislature has taken a first step toward bailing out on another part of the reform agenda: mandatory high school exit exams, which began in California in 2006 and were supposed to ensure a high school degree meant something[1]. On a party-line 6-2 vote, Democrats the Senate Education Committee this week approved a bill[2] by Sen. Carol Liu, D-La Cañada Flintridge, that would scrap the state’s high school exit exam beginning with the class of 2017. Liu, a former teacher and teachers union official who represents the Pasadena area, chairs the committee.

Cabinet Report had more[3] on her measure and a big complicating factor: What to do about students who were denied diplomas in the past because they failed a test that the state may abandon:

The legislation … that would suspend the state’s exit exam also calls on education officials to reconsider how students in the state are deemed not only ready to graduate but to lead productive lives afterward.

The question of whether to issue diplomas retroactively did come up when the bill was being drafted, according to a Liu staffer, but the provision was not included in the legislation.

Opponents of handing out diplomas retroactively to thousands of people who failed the test argue that it’s not necessary because there are several opportunities to continue retaking it, even years after graduation, and doing so cheapens the value of the diploma as a gauge for prospective employers.

Others, however, say these one-time exams provide little evidence that the person passing them is academically prepared for college and/or career.

Indeed, despite a 95.5 percent passing rate for California seniors last year, a study by the Legislative Analyst’s Office found that over 50 percent of the state’s high school students are in need of remedial work when they arrive at community colleges.

However, the Senate bill analysis noted praise of the exit exam and its impact.

According to independent evaluations conducted by the Human Resources Research Organization, California’s high school exit exam has served a valuable purpose by ensuring students demonstrate competency on standards, providing remediation opportunities prior to grade 12, and helping to overall narrow the achievement gap between subgroups. … A very strong relationship was discovered between CAHSEE achievement and college enrollment.

Liu’s measure, Senate Bill 172, will next be reviewed by the Senate Appropriates Committee.