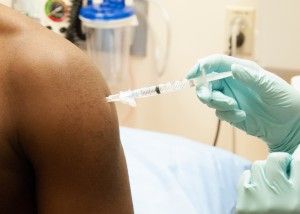 [1]Faced with an unexpected new source of opposition, California lawmakers trying to tighten up vaccine exemptions have been thrown back on the defensive.

“In requiring vaccinations as a prerequisite for enrolling children in school, detractors said, the bill would legalize institutional discrimination,” the Sacramento Bee reported[2].

According to the Associated Press, some lawmakers warned[3] “it could unconstitutionally create a second-class by depriving unvaccinated children of an adequate education.”

Bipartisan support for Senate Bill 277, which would scrap the Golden State’s personal belief exemption and require immunization for school admittance, has remained strong. But although the Senate Health Committee recently cleared the bill in a 6-2 vote, the addition of the discrimination objection gave new force to opposition leveled by anti-vaccination parents and groups.

As a result, SB277 has stalled, only to return once legislators are convinced that the new questions have been conclusively answered.

The bill’s sponsors, state Sens. Richard Pan, D-Sacramento, and Ben Allen, D-Santa Monica, have weathered criticism before. As CalWatchdog.com noted[5] previously, party affiliations have been a poor guide to how Californians have responded to the vaccination controversy: Some Republicans have strongly supported tightening exemptions, while others haven’t, and Democrats have ranged from supporting the status quo to advocating an end to all exemptions.

But in recent weeks, the two Senate Democrats have faced a barrage of criticism from parents and activists able to fight the bill’s progress in public. This week, Pan and Allen took to the editorial page of the Fresno Bee to defend SB277.

“We respect the very personal decisions that parents have to make for their children,” they wrote[6]. “But all children deserve to be safe at school, and the personal belief exemption is now endangering the

public. Senate Bill 277 will not remove a parent’s choice to vaccinate his or her child. However, choice brings with it responsibility, and under the measure, parents who decide not to vaccinate will have to home-school their children.”

Unfortunately for the bill’s prospects, that very consequence has become the focus of the debate.

As the San Jose Mercury News observed[8], SB277 began to take fire from objectors who threatened to deprive schools of enrollment money:

“Parents like San Jose resident Elaine Shtein are being encouraged to bring a son or daughter to stand with them before the eight-member Senate Education Committee on Wednesday with a warning: If the bill passes, they pledge to yank their children out of public and private schools, and home-school them, something they believe will deprive both the state and private school systems of money for every student enrolled.”

According to the Mercury News, education analysts suspected that the impact on school budgets would be relatively marginal. But regardless of how little money schools lose, the prospect of a constitutional challenge to SB277 was enough to spook lawmakers into sending Pan and Allen back to the drawing board.

Although Pan and Allen proceeded with some care in crafting a simple but focused bill, they nevertheless failed to anticipate the level of difficulty they faced in legislating tighter vaccination rules. Pro-vaccination critics warned that Sacramento’s strategy has ineptly fostered a legislative environment, turning each committee hearing on the elimination of the personal belief exemption into a media opportunity for absolutist anti-vaccine groups.

“A smarter approach would be to retain a narrow personal belief exemption in states that already have one and avoid the kind of polarizing fight that California is now having,” wrote[9] Brendan Nyhan at the New York Times. “These states could tighten exemption rules as experts recommend to more appropriately strike the balance between parental choice and the health needs of the community. Given the potential risks that unvaccinated children pose to the community, the process of obtaining an exemption can be rigorous and demanding.”