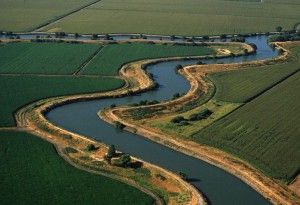 The unpalatable choice underscored both Brown’s resolve to see the project through and the daunting challenges he still faces in trying to secure enough political support to do so. Without the tunnel plan, Brown would have to go back to square one in his ambition to secure adequate water resources for Southern California over the long term.

As the San Jose Mercury News reported[2], the $25 billion tunnel project contained $7.8 billion earmarked for preservation and restoration efforts affecting some 100,000 acres of wetlands and targeted areas. Throwing that sum into doubt, Brown has walked way from the centerpiece of the environmental plan — a so-called “50-year guarantee” to environmentally safeguard the Delta.

Although the surprise change has not yet been finalized, Brown’s choice appeared to be cemented by a lack of federal regulatory support for the commitment. According[3] to CBS San Francisco, “biologists at the U.S. Fish and Wildlife Service and other federal agencies told the state they won’t issue permits for the environmental plan because the state cannot prove it will restore salmon, smelt and other wildlife.”

Now, as water resources officials told[4] the San Francisco Chronicle, Brown hopes “to use $17 billion from state water contractors just to build and operate the tunnels. That would allow habitat restoration work on the delta and surrounding waterways to begin immediately regardless of what happens with the tunnel project,” according to Bay Delta Conservation Plan spokesman Richard Stapler. But the Chronicle noted that “large water contractors footing the bill have said they aren’t willing to pay for the plan if they don’t have long-term water guarantees.”

Contractors have become skittish over the plan’s budget for complex reasons. The half-century guarantee Brown has decided to jettison didn’t just provide environmentalists with a predictable framework. It helped water agencies manage their own expectations as well. “The agricultural and urban water districts that are the major drivers of the long-planned project were betting that a 50-year permit would stabilize delta deliveries that have been restricted by increasingly stringent protections for endangered fish,” the Los Angeles Times reported[5].

Since a narrower time frame would open up the possibility of changes in permitting rules, water districts and contractors grew concerned that it was becoming too hard to determine if the high cost of the tunnels would pay off.

Brown’s move confirmed fears state environmental groups have harbored for years. As early as 2013, environmentalists went public with criticism of the tunnel plan. In a sign of how strongly they opposed Brown on the issue, some policy activists used the divisiveness of Brown’s other cherished high-stakes project — high-speed rail — to amplify skepticism for the tunnels.

Jonas Minton, water policy adviser for the Sacramento-based Planning and Conservation League, told[6] the San Jose Mercury News that both the train and the tunnels were “very questionable.”

“High-speed rail only has a very small down payment,” he said. “The water plan doesn’t even have that. The public should be very concerned.”

More recently, even some elected officials in Brown’s own party turned against him. Rep. John Garamendi, D-Fairfield, pushed[7] a federal bill this past September that would block Washington from fulfilling Brown’s request for $4 billion in funding aid.

And as the New York Times observed[8] last month, even the Environmental Protection Agency weighed in against the plan, out of concerns it “would greatly increase the amount of water drawn from the delta area because of the high capacity of the tunnels. This increase, they fear, would endanger fish and other wildlife.”