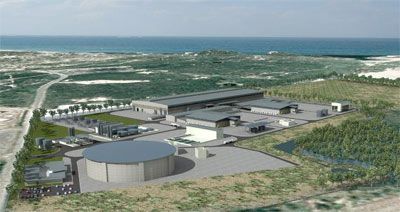 The dramatic announcement by Gov. Jerry Brown earlier this month of a 25 percent cut in water use across much of California triggered harsh commentary in the state and across the nation over the lack of preparation by government agencies and water districts for a long-term drought. A typical focus was incredulity over a dry coastal state’s failure to embrace desalination plants, as has been done in Israel[1], Saudi Arabia and other arid coastal nations.

But almost none of the coverage has reflected the fact that formal, official planning[2] has been going on for years for one of the world’s largest desal plants along the coast of the Camp Pendleton Marine base in north San Diego County. Any construction is years off, but necessary preparatory work is well under way.

The image above of a proposed desal plant there comes from a 2010 presentation[3] by the San Diego County Water Authority. It shows how sky-high water planners are on the potential of the 17-mile Camp Pendleton coast. Attention is now focused on a site in the southwest corner of the 125,000-acre base, just north of Oceanside and about 20 miles north of the Carlsbad desalination plant that is scheduled to open in coming months.

The Carlsbad plant will be the biggest in the Western Hemisphere and is expected to produce 50 million gallons of water a day — 7 percent of the San Diego region’s needed supply.

The Camp Pendleton project would be far bigger, with desalination experts saying 150 million gallons of water a day is realistic. That would make it one of the largest desal plants in the world.

A Saudi Arabian desalination plant will produce 264 million gallons a day when its first phase is complete, Bloomberg News reports[4].

A 2009 San Diego County Water Authority report[5] didn’t take it for granted that the Pendleton project’s supplies are needed. It spoke of only expanding the project to the full 150 million gallons a day “as supply and demand conditions warranted.”

After four years of drought, there’s not much doubt that California needs far more reliable water sources — especially in the San Diego region, given that local water officials have spent 20-plus years fighting[6] with the giant Metropolitan Water District over supply and costs.

The water mega-wholesaler has long opposed San Diego’s efforts to diversify its water supply by partnering with Poseidon, a private company, to build the Carlsbad plant and by striking a deal to shift Colorado River water from agricultural uses in Imperial County to supplies for homes and businesses in San Diego County.