But Sandoval sought to temper worries with his announcement, according[2] to the Las Vegas Review-Journal:

“This is not California,” Sandoval said, adding that as the driest state in the nation, Nevada is familiar with drought and has taken steps to curb water use and encourage conservation.

He said he feels “really good about what we’re doing” but added the state needs to plan for the future because no one can predict how long the drought will continue.

Through an executive order, the San Francisco Chronicle reported[3], Sandoval created “a seven-member panel of administrators, scientists and water officials to study the state’s long-term water plan.” Drawing from information provided by state and water agencies, the panel will set up a special Drought Summit scheduled for September of this year, filing biweekly summaries and a master report, according to the Chronicle. “The forum will rely on a soon-to-be-released report on states’ drought policies commissioned by the Western Governors Association, which Sandoval chairs.”

Sandoval’s moves build on an awareness of California’s challenges that reaches back to a collaborative initiative launched with Gov. Jerry Brown late last year. As chairman of the Western Governors’ Association, Sandoval organized a yearlong summit series with Brown that included “senior water, energy and agriculture policy leaders from government and the private sector,” the Associated Press reported[4].

“I think the drought will test our imagination and our science, our technology and our political capacity to collaborate,” Brown said at the time.

This year, both California and Nevada residents found their states plunged into nearly 100 percent drought conditions. Large stretches of both states suffered from “extreme” and “exceptional” drought, the most severe categories of water scarcity, Capital Public Radio observed[5].

The Golden State and the Silver State have long shared major sources of drinking water, including Lake Mead. While Gov. Sandoval indicated that the Nevada Drought Forum would be restricted to studying and recommending policy options, the proposal had no immediate effect on water rationing. At the start of this month, Southern Nevada Water Authority Bronson Mack had waved off concerns over additional water restrictions. 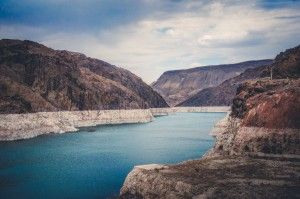 “We believe the programs that we have and the tools that are available to our customers throughout the valley are sufficient,” he said, although he admitted that Nevada’s supply of water from Lake Mead ranked below the other five states relying on that source, according[7] to Reuters.

“Lake Mead is one of at least four major sources for California’s water supply. The state draws 1.4 trillion gallons from the reservoir. By comparison, Clark County gets 90 percent of its water — or 97.8 billion gallons — from Lake Mead.”

John Entsminger, general manager of the Southern Nevada Water Authority, told the Review-Journal that Nevada’s current levels of water use reflected a sustainable conservation trajectory. Clark County, for instance, “which receives most of its water from the Colorado River feeding into Lake Mead, has been under drought conditions for 15 years.”

“Still, he said, the region, home to about 2 million residents and 40 million visitors annually, has managed to cut water usage through efficient landscaping, low-flow appliances and recycling gray water. Entsminger said Southern Nevada uses 40 percent less water than it did 15 years ago despite a growing population.”

The Nevada Legislature, for its part, has several new water-related bills to consider this year. According to the Associated Press, one piece of legislation would tap[8] half a million dollars for so-called “cloud seeding,” a process whereby precipitation-inducing chemicals are dispersed into cloud cover; others would increase groundwater regulation during periods of drought and battle water loss caused by flooding.