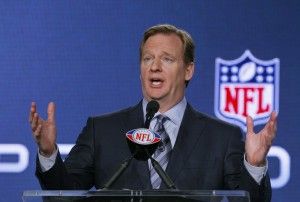 In the latest lurch forward for Los Angeles football, NFL Commissioner Roger Goodell has given his blessing to both of the area’s competing plans for team stadiums.

“We had presentations earlier this week that are very exciting,” Goodell said[2], according to the Associated Press. “Not just for a return but to continue being successful going forward.”

As NFL.com observed[3], the Oakland Raiders, St. Louis Rams and San Diego Chargers have until January to make their formal bids for relocation, “though that window could be moved up, according to Goodell. No team can move unless the owners vote in favor of relocation. A vote could occur at the NFL Annual Meeting next March.”

In a complex year of intrigue and negotiation without parallel in football history, all three teams considering a move to Los Angeles have been wooed by their present home cities. But no team has been squeezed out of a potential L.A. relocation, despite a host of interlocking factors that could derail a bid. Audibles have been called to avoid that fate; in a surprise agreement, for instance, the Raiders and Chargers threw in on a joint deal that would see both teams play out of a single stadium in Carson, north of Long Beach.

Although initially, stadium plans had been drawn up exclusively under the Chargers’ auspices, the teams spent months working together to forge a plan that would excite Goodell — now, a mission accomplished.

“A signature element of the design is a 115- to 120-foot tower that rises through and extends above the main concourse,” the Los Angeles Times noted. “It would serve as a pedestal for a cauldron that would change depending on the team. When the Chargers play, simulated lightning bolts would swirl behind glass encasing the tower and, if the team were to score a touchdown, a bolt would shoot out of the top. For Raiders games, a flame would burn in the cauldron in honor of legendary team owner Al Davis.”

Last week, Carson’s City Council became[4] the second to unanimously approve stadium plans. (Inglewood recently gave[5] its unqualified support to Rams owner Stan Kroenke’s plan for a sprawling stadium and entertainment complex, located on land that his development group purchased from Walmart in the wake of its failed bid to build a superstore on the lot.)

In Missouri, meanwhile, officials have been feeling the heat. Kroenke’s steady pursuit of an L.A. option, and the competitiveness of the Chargers/Raiders scheme, recently forced the hand of Gov. Jay Nixon. He had labored to entice the Rams to stay in St. Louis with a new stadium plan, funded much in the same way as the deal that lured them away from Los Angeles back in 1994.

“It was expected that the state of Missouri, St. Louis County and the city of St. Louis would strike a deal similar to the one put in place to pay for the Edward Jones Dome,” according[6] to the International Business Times. “That deal called for $12 million annually in taxes for the state in addition to $6 million each from the city and county to be paid toward stadium bonds that run through 2025. Nixon’s team suggested officials could extend payments on the bond debt for Edward Jones Dome to free up money in the short term to put toward the new stadium.”

St. Louis County officials, however, balked at the prospect of a long, drawn-out path to public funding. “Rather than wait until the November election for St. Louis County to vote on the issue and lose precious months to Kroenke’s Los Angeles project, Nixon’s office opted to cut them out of the deal altogether,” the Times reported. “To stadium proponents, it was better to lose a source of public funding in the short term than to count on that support and not get it in the long term.”