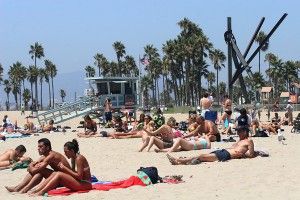 [1]Inspired by a recent resurgence in partial nudity as a women’s rights issue, the Venice Neighborhood Council in Los Angeles recommended that topless sunbathing be permitted. In decades past, fully nude beachgoing had been tolerated. In a 12-2 vote, the VNC confirmed that it “supports women being afforded the same rights as men,” according[2] to the Los Angeles Times.

“The city and county of Los Angeles prohibit nude or topless sunbathing. But Melissa Diner, the Venice council community officer who sponsored the resolution, said the panel would draft letters to Councilman Mike Bonin, Mayor Eric Garcetti and the Los Angeles County Board of Supervisors, which has jurisdiction over the beach, calling for Venice to be exempted.”

Council community officer Melissa Diner called the matter “a serious equality issue” intended to “start a conversation about not only wanting to show our nipples on Venice Beach but about what else people want to see.” On social media, the “Free The Nipple” movement has caught on with a broad swath of younger generations around the world. At FreeTheNipple.com, organizers have displayed[3] a mission statement, complete with a political agenda:

“We stand against female oppression and censorship, both in the United States and around the globe. Today, in the USA it is effectively ILLEGAL for a woman to be topless, breastfeeding included, in 35 states. In less tolerant places like Louisiana, an exposed nipple can take a woman to jail for up to three years and cost $2,500 in fines. Even in New York City, which legalized public toplessness in 1992, the NYPD continues to arrest women. We’re working to change these inequalities through film, social media, and a grassroots campaign.”

According[4] to The Raw Story, although Diner was directly inspired by the Free The Nipple campaign, local skepticism remained significant:

“Linda Lucks, president emeritus of Venice neighbourhood council, doubted the proposal will win approval given the precedent. ‘Nude sunbathing was perfectly legal in L.A. until the mid 1970s when a formerly quiet nude beach was discovered by a man (with) a wide angle lens. The photos were published world wide causing a crush of voyers and poseurs, forcing the City Council to ban nude sunbathing city wide[.]'”

Although proponents of the topless ordinance pointed out that Venice had always aimed to bring a more European flair to Southern California, the speed of change in American sexual mores moved too quickly for the beachside neighborhood to manage the last time more permissive standards applied. “News crews swarmed,” the Times recalled. “Helicopters hovered. Lifeguards found themselves rescuing people with nothing material to grasp. Lascivious men in leisure suits showed up carrying cameras with telephoto lenses.” 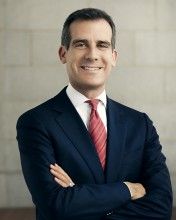 In that sense, Garcetti would be well-positioned to defer to the wishes of the Venice Neighborhood Council. On the other hand, the topless ordinance would cut against Venice’s fresh reputation as the home of top-flight tech firms and pricey dining and shopping. Although Garcetti’s office has not ruled topless Venice beaches out of hand, as the New York Post reported[7], Garcetti’s director of communications, Yusef Robb, “appeared to pour cold water on the idea. ‘I think it’s safe to say that most of our constituents would rather we keep our eyes on more pressing problems facing our city,'” he said.