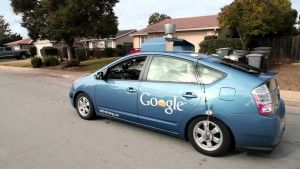 [1]Google admitted that its self-driving cars had racked up some dings on California’s streets, prompting[2] a flurry of interest and caution among analysts closely watching the tech giant’s foray onto American roads. Reported NBC News:

“Four of the nearly 50 self-driving cars now rolling around California have gotten into accidents since September, when the state began issuing permits for companies to test them on public roads. Two accidents happened while the cars were in control; in the other two, the person who still must be behind the wheel was driving, a person familiar with the accident reports told The Associated Press.”

The relatively minor news provoked outsized attention, especially in California, because of the way self-driving cars heighten the tension between public issues of safety and transparency. “The fact that neither the companies nor the state have revealed the accidents,” noted[3] the AP, “troubles some who say the public should have information to monitor the rollout of technology that its own developers acknowledge is imperfect.”

On the other hand, the layer of secrecy involved in the incidents came courtesy of California’s own pro-privacy regulations. “In half of the fender benders,” Endgaget reported[4], “the cars were in control when the accident occurred, and all of them happened at speeds of under 10 MPH.” None resulted in injuries; because of “the state’s privacy laws, the report doesn’t indicate any further details — like if they happened while backing out of a parking space, for example.”

The head of Google’s automated car program, Chris Urmson, emphasized that Google’s cars encountered just 11 accidents over 6 years and nearly 1 million miles on the road. Ironically, he suggested[5], the real lack of transparency that should concern drivers is the uncertainty surrounding the nature of unreported accidents with little damage and no injuries: “according to National Highway Traffic Safety Administration data, these incidents account for 55 percent of all crashes. It’s hard to know what’s really going on out on the streets unless you’re doing miles and miles of driving every day.”

Meanwhile, across the border in Nevada, Daimler Trucks North America became[6] the first to license a self-driving big rig this week in Nevada, as USA Today reported:

“Four of the experimental Freightliner trucks — Freightliner is a Daimler unit — drove around Nevada for a total of 10,000 miles over six months, says Steve Nadig, the chief engineer on the project.” 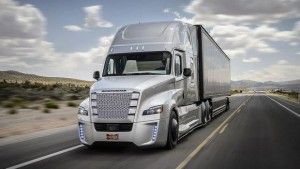 [7]In addition to a test track in Germany, Daimler sent out two trucks on “quiet public roads in Nevada,” according to Wired[8]. “To earn the autonomous vehicle license plate from Nevada, Daimler needed to prove the system could safely cover 10,000 miles on its own.”

In a Las Vegas press conference, Daimler board member Wolfgang Bernhard depicted the trucks as a step ahead of self-driving cars in safety, desirability and economic impact. But Bernhard conceded that the trucks wouldn’t hit commercial viability until “enough U.S. states allow them on their roads to make inter-state commerce viable,” as Reuters summarized[9] his remarks.

Despite the regulatory challenges and red tape involved in licensing self-driving trucks, said Bernhard, California — along with nearby Arizona and auto-centric Michigan — “had shown an interest in self-driving trucks, but more states would need to get on board before the federal government took up the issue.”

Analysts did quickly flag one big economic difference between self-driving cars and trucks: jobs. Whereas switching to automated cars wouldn’t necessary eliminate jobs, automated trucks would eventually render truckers increasingly obsolete. “The trucking industry constantly struggles to find enough drivers, even when unemployment is high,” noted[10] Vox. “And the cost of a machine operating a vehicle will be dramatically cheaper than the cost of a human.”