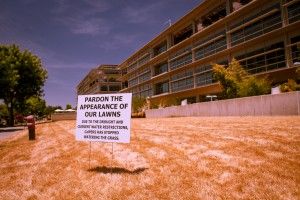 [1]Looking for an edge in coping with California’s drought, officials around the state have embarked on a public relations campaign for recycled drinking water.

Proponents of the new push hoped to capitalize on the bad publicity hitting the bottled water industry, where several suppliers have come under scrutiny for drawing their water from California. This month, “Starbucks announced that it would begin a process to move the bottling operations for its Ethos water brand to Pennsylvania,” NBC News reported[2]. Nestle, meanwhile, refused to stop sourcing its water from public lands in the Golden State, although its pumping permit expired decades ago, and activists have petitioned the California Water Resources Control Board to halt the practice.

“The attention on Nestlé’s permit bumped it to the front of the pile for renewal review. The process will take at least 18 months, Heil said. Meanwhile, Nestlé can continue to operate in the forest as long as the company continues to pay the annual fee of $524 on the expired permit and operate under its provisions.”

Feeling the heat, Nestle Waters North America’s Tim Brown took to the San Bernardino Sun to vouch[3] that California bottling operations should not be considered water-wasting culprits. “Our latest conservation measures include a waste-water recovery project expected to save annually 25 million gallons of water,” he wrote. “We supported the recent water bond to improve infrastructure and protect and restore watersheds and ecosystems and we believe that California’s new groundwater management legislation is a step in the right direction.”

Yet, “despite the extensive science that goes into cleansing recycled water down to its molecular construction, in a recent study, 13 percent of adults said they would point-blank refuse to try it,” according[4] to The Week. “Similar efforts in the past to jumpstart the recycled water trend in the state have failed.”

California’s long history with recycled water projects has lent credence to those who expect the pattern to continue. “Enticing people to drink recycled water […] requires getting past what experts call the ‘yuck’ factor,” as the New York Times observed[5]. “Efforts in the 1990s to develop water reuse in San Diego and Los Angeles were beaten back by activists who denounced what they called, devastatingly, ‘toilet to tap.’ Los Angeles built a $55 million purification plant in the 1990s, but never used it to produce drinking water; the water goes to irrigation instead.”

Orange County officials, however, have brightened hopes for the recycled water movement. As Southern California Public Radio suggested[6], the O.C.’s successful recycling program has underscored why “calling it ‘toilet to tap’ isn’t fair.”

“The recycled sewage water makes quite a journey on its path to purification before it comes out of faucets at home. About 2.4 million Orange County residents get their water from a massive underground aquifer, which, since 2008, has been steadily recharged with billions of gallons of purified wastewater.”

At the statewide level, fans of recycled water had a bit more news to cheer as well. In Sacramento, the author of a string of recycled water-use bills stretching across the several years, Assemblyman Mike Gatto, D-Glendale, recently secured committee support for Assembly Bill 1463[8], another proposal pushing the approach to conservation. “Gatto’s legislation to help reduce the barriers for onsite-water recycling and allow more Californians to participate in safe and sustainable recycled-water practices was approved by the Assembly’s Water, Parks and Wildlife Committee on a 15-0 vote,” according[9] to California Newswire.