Protests erupt at Nestlé bottling plants in Sacramento and L.A. 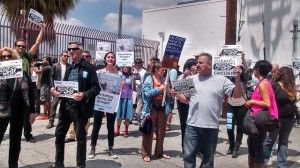 At the protests, in Los Angeles and Sacramento, activists delivered more than 500,000 signatures from people in California and around the country who signed onto a series of urgent petitions to Nestlé executives, Governor Brown, the California State Water Resources Control Board,  and the U.S. Forest Service urging an immediate shutdown of Nestlé’s bottling operations across the state.

“With people across California doing their part to conserve water — it’s time that Nestlé did the right thing and put people over profits — by immediately halting their water bottling operations across the State,” wrote Tim Molina in a press release. He is the strategic campaign organizer for the California-based Courage Campaign. “If Nestlé won’t do what’s right to protect California’s precious water supply, it is up to Governor Brown and the California Water Resource Control Boards to step in and stop this blatant misuse of water during our state’s epic drought.”

The Desert Sun conducted an investigation[2] on bottling practices in March and found that Nestlé has been operating on a permit that expired back in 1988. The findings continue as follows:

[3]A recent poll[4] by Forbes noted that 65 percent of Americans believe that Nestlé “should stop using California water to create bottled water.”

But Bruce Maiman from the Sacramento Bee reported[5] Nestlé uses 80 million gallons per year, in comparison to the 65 trillion gallons of water that the state normally receives. He noted Nestlé’s bottling operations are “troubling” but halting them will likely solve nothing.

Nestlé has responded[6] to harsh criticism in a variety of statements and outlined the impact of their operations in California, stating[7] that the water they source from the state is “used efficiently and effectively, and bottled so that it can be drunk as part of a healthy diet.” The amount of water that Nestlé withdraws is “[l]ess than 0.008 percent of the total.”

Even if Nestlé were to shut down all of its bottling plants in California, “the resulting annual savings would be less than 0.3 percent of the total the governor says the state needs residential and public users to save.”