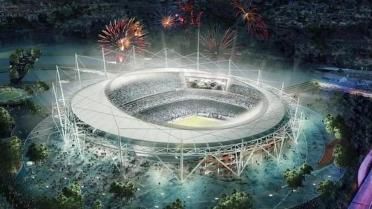 The San Diego stadium task force’s proposal[1] to finance a $1.15 billion stadium project to keep the Chargers from fleeing to Los Angeles has been subject to close looks for more than a week now. There’s no consensus at all about whether the plan to build a new stadium (illustration at right) at the site of the old stadium in Mission Valley is fair to taxpayers or more of a giveaway of public funds.

Some see a plan in which San Diego does much better than the cities which have hosted other NFL teams seeking new stadiums. In a commentary[2] by David E. Watson, a San Diegan involved in the effort to build Petco Park, the Padres’ downtown baseball stadium, he says it’s unusual for “a professional sports team and league to pay for more than 60 percent of a new modern sports facility.”

Some see a plan that is vaguer and much costlier[3] than it lets on. This is from Voice of San Diego:

Taxpayers could end up investing nearly $1 billion in the new Chargers stadium under the plan released this week by the mayor’s stadium task force, a Voice of San Diego analysis of the plan shows.

The analysis includes all the public money the task force said would need to go toward the stadium, plus the money to prepare the Mission Valley site for development and some costs the task force neglected. Most notably, the task force did not factor in the price tag to operate and maintain the facility every year – something that costs the city about $11 million a year at the current site.

Some see the proposal as a clever ploy to undercut the claims the Chargers will make to other NFL teams to win their support — 24 of the 32 teams must give their blessing if a franchise wants to relocate, and they don’t want the bad blood seen when the Colts fled Baltimore in the middle of the night in 1983. This is from Union-Tribune columnist Nick Canepa[4]:

… if the franchise turns this down, it simply will mean it doesn’t want to stay here. Because there is enough for them to remain — maybe not L.A. money, but enough. After all, haven’t they always said their objective is to remain “competitive” with the rest of the teams in the NFL, not to make billions?

Remember, the NFL and Chargers have claimed that their preference is for the team to remain in San Diego, provided our city puts forward a plan that meets or exceeds the competitive city.

The plan proposed this week does this, overwhelmingly.

But one way or the other, one thing is clear: Whatever the problems with its plan, San Diego has a serious proposal. In Oakland, there’s a $500 million gap in financing a stadium that officials can’t seem to finesse.  San Francisco Chronicle columnists Matier and Ross say they hear the Raiders’ plan is “gurgling blood.” Really[6].

Meanwhile, San Diegans who want to keep their team have an unlikely supporter: one of the most famous dropouts of the London School of Economics. Yes, it’s Mick Jagger[7]. “We are having such a great time in San Diego. It’s so beautiful here. Why would anyone want to leave? Especially the Chargers,” Jagger said at a Sunday night Rolling Stones concert at Petco.