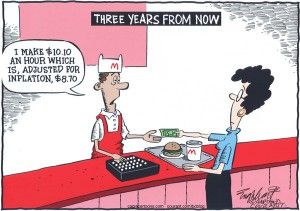 [1]By a nearly unanimous vote, the Los Angeles City council voted to raise the city’s minimum wage to $15 an hour by 2020. As the biggest development yet in a nationwide labor effort meant to compensate for failed federal legislation, the move quickly triggered celebrations among activists — and a call to use L.A. as a template nationwide.

As the New York Times opined[2] in a full-throated editorial, the hike “challenges Congress and other states, particularly New York. In Congress, the latest Democratic proposal calls for a federal minimum wage of $12 an hour by 2020. That would be adequate, if a bit on the low side, and a huge improvement from the current $7.25 an hour, the level since 2009.”

Yet pro-hike analysts have already begun to make the case for further increases by downplaying the relative significance of the $15 benchmark. According[3] to FiveThirtyEight, for instance, “$10 is a more accurate reflection of what low-wage Angelenos will actually experience,” thanks to inflation and cost of living.

“Los Angeles’s minimum wage won’t go up to $15 tomorrow,” FiveThirtyEight observed. “Instead, the hike will be phased in over the next five years. Assuming inflation holds more or less steady, $15 an hour in 2020 will be worth the equivalent of about $13.75 today.”

“But the bigger issue is that $15 doesn’t go as far in Los Angeles as it does in most of the rest of the country. Not even close. According to data from the Council for Community and Economic Research, it costs workers about 40 percent more to live in Los Angeles than in the average American community. That means that $15 in L.A. is the equivalent of less than $11 in the U.S. overall.”

In fact, however, the City Council’s vote has made such waves because it ratchets up the minimum wage “not just once but forever, with automatic annual hikes starting in 2022,” according[4] to the Los Angeles Times.

That has city business owners on edge, the Times added. “The requirement aims to ensure that wages keep pace with cost-of-living increases, but business advocates say it could cripple entrepreneurs’ ability to adjust wages to unpredictable economic conditions — effectively enshrining automatic annual layoffs when times get tough.”

For labor advocates, however, the L.A. vote represented a capstone achievement in California, where minimum wage increases were recently passed at the municipal level throughout the Bay Area. Well aware that the $15 mark was first established by activists on the other side of the country, labor organizations quickly set their sights on the rest of the U.S., as one official told[5] the Washington Post:

“How L.A. got to that number is rooted in the activity generating from the East Coast, where New York fast-food workers raised this as a demand, starting their first strikes two years ago,” says Laphonza Butler, president of the Service Employees International Union’s home care workers unit in Los Angeles. “It has just become the vernacular of the workers movement. And when Mayor Garcetti introduced his proposal at $13.25, we all knew that wasn’t enough.”

To begin consolidating the California gains that could launch a nationwide effort, local activists have turned their sights on the L.A. metro area as a whole.

“Campaigners for a $15 minimum wage are targeting Los Angeles County and a cluster of nearby cities to swiftly cement and expand their victory,” the Guardian noted[6]. “The coalition of organised labour, civic activists, religious leaders and ordinary workers hopes to create a domino effect by persuading L.A. County and incorporated cities such as Long Beach, Santa Monica, Pasadena and West Hollywood to follow the city of L.A. and increase their minimum wages to $15 an hour too.”

Under pressure to offer up a constructive option, as opposed to simply digging in against the hikes, business leaders have begun to consider pushing an increase in the so-called earned income tax credit. “The process is simple: You file a tax return, and the government sends you a check,” wrote[7] Warren Buffett in the Wall Street Journal. “In essence, the EITC rewards work and provides an incentive for workers to improve their skills. Equally important, it does not distort market forces, thereby maximizing employment.” As wage-hiking activism continues, however, one question will be whether Americans wind up supporting both higher mandated wages and bigger tax credits.