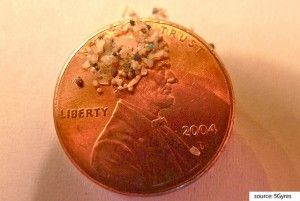 After a near miss last year, a new push to ban so-called microbeads has gained momentum, clearing the California Assembly.

The tiny plastic orbs, especially prevalent in cosmetics and personal care products, like facial scrubs, became the target of environmentalist scorn over recent years. Instead of quickly biodegrading, the microbeads slip through natural and artificial filtering mechanisms, showing up in oceans, animals and, ultimately, in the food we eat.

Assemblyman Richard Bloom, D-Santa Monica, introduced Assembly Bill 888[2] this year, hoping to avoid a repeat of his unsuccessful effort in 2014. On that occasion, the state Senate rejected[3] Bloom’s bill by a single vote.

Although energized activists worked to build a broader coalition the second time around, AB888 retained a key component from last year’s bill that contributed to its failure. “If the California bill becomes law,” the New York Times reported[4], “the state would ban not only synthetic particles but the biodegradable ones that many companies have been developing as alternatives.”

That starkly contrasted Bloom’s legislation with successful bills, in states like New Jersey, that permitted other biodegradable materials to be used in microbead-like fashion. Stiv Wilson, associate director of the anti-microbead 5 Gyres Institute in Santa Monica, told[5] the San Francisco Chronicle that provision placated worried manufacturers.

“Wilson said California’s bill met fierce industry opposition, while a bill in New Jersey sailed through. He said the difference came down to a loophole in the New Jersey bill, which allows for bioplastics made from polylactic acid to replace the polyethylene and polypropylene plastic currently used.”

As New Jersey legislators have struggled to decide whether to ask Gov. Chris Christie for a “conditional veto” that would wipe out that allowance, Bloom’s bill has added California to a relatively short list of states reckoning with the impact of microbeads. As the Times noted, in addition to New Jersey, Colorado, Illinois and Maine have legislated restrictions on their use, “while bills are pending in others, including Michigan, Minnesota, Washington and Oregon.”

The turn against microbeads hasn’t just come from environmentalists, however. Some big corporations using microbead technology have announced they’ll soon phase in alternatives still in research and development. As Vice News reported[6], Colgate, Johnson & Johnson and L’Oreal have “promised to rid their products of the stuff, though the adjustment could take several years to complete.”

Johnson & Johnson, for instance, explained[7] in a statement that microbeads will be eliminated “by the end of 2017,” while the development of new products with microbeads has already been ceased. “Our goal is to complete the first phase of reformulations by the end of 2015, which represents about half our products sold that contain microbeads,” the statement concluded.

Initially, microbeads were seen by sellers and shoppers as a beneficial innovation. “Manufacturers initially turned to the tiny plastic particles because they are cheaper and generally don’t cause allergic reactions while giving consumers the feeling of a deep clean,” as the Chronicle recounted[8]. But health concerns about microbeads have mounted since their use dramatically spread. “I have been warning my patients away from plastic microbeads for years,” one member of the American Academy of Dermatology told[9] Vice. “They are horrible. Initially it wasn’t known that they were so harmful. It was definitely a case of unintended consequences.”

For now, industry interests have not coalesced as powerfully against Bloom as in the past. Giving manufacturers more lead time to adjust, AB888 “would prohibit the sale of microbead-containing products beginning in 2020,” as the Sacramento Bee noted;[10] a leading industry group has “adopted a neutral position” as amendments to the bill have specified its scope and reach.