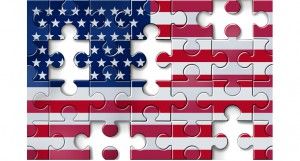 [1]A pair of high-profile cases taken up by the Supreme Court could invalidate California’s redistricting system, scrapping citizen-led efforts to free it up from partisan wrangling.

A tale of two controversies

“The fate of the citizen redistricting commission hangs most directly in the balance, pending a decision by the court in June about whether such panels are legally allowed to determine congressional districts,” the Los Angeles Times reported[2]. “If the court strikes down independent commissions, it could set off a scramble in the Legislature to redraw California’s congressional map.”

In another case, the Supreme Court could make even bigger waves next year with a ruling on who must be counted within a state during the district-drawing process. As Yale law professors Bruce Ackerman and Ian Ayers noted[3], the court will face “two basic options. It can stick with what most states do now and require each district to contain an equal number of inhabitants: This will favor urban Democratic areas with many immigrants and children. Or it can instead insist that districts include an equal number of eligible voters, and thereby favor rural Republican regions.”

For those working to legalize unlawful immigrants, much was placed at stake by the court’s decision to take up the case. If the court were to rule against counting immigrants with partially legal or illegal status, the political balance of power in California would transform overnight. What’s more, the push to fully legalize all immigrants would hit a substantial and symbolic obstacle.

But restricting statewide head counts to eligible voters only — a much smaller population than the one excluding unlawful immigrants — could send political shock waves through California. As the Washington Post confirmed[4], “high-diversity districts like the 40th in Los Angeles County have substantially fewer eligible voters than the whiter, rural section of the state represented by the northern 1st District. Measured by population, the two districts are equal in size. Measured by eligible voters, the northern 1st District is twice as big as [the] LA-area’s 40th[.]”

State Senate Leader Kevin de Leon, D-Los Angeles, bridled at the implications of that shifted standard. Referring to the time period before 1964, when the court ruled districts had to be approximately equal, de Leon noted that “Los Angeles County and its 6 million people […] had the equivalent voting power in our state Senate as a rural district with barely 14,000 people.”

Hoping to prevent that kind of change, Ackerman and Ayers have argued that Section 2 of the 14th Amendment should determine the outcome, since its language clearly indicates that districts “shall be apportioned among the several States according to their respective numbers, counting the whole number of persons in each State, excluding Indians not taxed.” But even if the court shies away from leaving uncounted all residents ineligible to vote, the exclusion of native Americans could be interpreted as a logical precedent for excluding immigrants lacking a formally and fully legal relationship with the federal government and the state within which they reside.

Until now, the Supreme Court has not seen fit to intervene so extensively in the way redistricting is done. From a nonpartisan standpoint, the plaintiffs’ case offered an opportunity for the court to clarify an area of constitutional law that had been left unspecified.

Partisan standpoints, however, have prevailed to date. As the New York Times observed[5], the headcount case originated in “a challenge to voting districts for the Texas Senate,” brought by two voters “represented by the Project on Fair Representation, the small conservative advocacy group that successfully mounted [an] earlier challenge to the Voting Rights Act. It is also behind a pending challenge to affirmative action in admissions at the University of Texas at Austin.” That pedigree has gone a long way to shape expert reaction to the case.