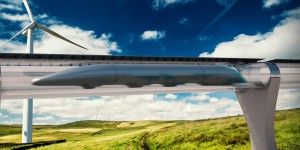 [1]Elon Musk proposed it years ago. This January, he announced he’d enable teams to test it out on a track in Texas. But the first entrepreneur to ink a deal for a Hyperloop test track will bring the concept to life in California.

According[2] to Navigant Research and CBS News, Hyperloop Transportation Technologies — an entity that picked up independently where Musk left off with the idea — “has inked a deal with landowners in central California to build the world’s first Hyperloop test track.” Beginning in 2016, HTT would oversee construction of five miles of track along I-5, where, once completed, test speeds will be kept to around 200 miles per hours — less than a third of the top rate of travel envisioned by Musk.

Outlays for the fully-completed Hyperloop would likely come in far under the budget for California’s high-speed rail project, even with cost overruns:

The 5-mile test track is estimated to cost about $100 million, which Hyperloop Transportation Technologies hopes to pay for with its initial public offering (IPO) later this year, according to Navigant’s blog. Assuming building costs remain the same, a 400-mile (644 km) track between Los Angeles and San Francisco would cost about $8 billion (not including development costs), experts estimate. This price tag is still far less than that for California’s planned high-speed rail project, which could cost $67.6 billion, according to the California High-Speed Rail Authority.

HTT emerged from a crowdsourcing platform, JumpStartFund, created in 2013 by Dirk Ahlborn. “He’s used it to attract experts with day jobs at universities and companies such as Boeing and SpaceX who moonlight on the project in exchange for future profits,” as National Geographic explained[3].

But HTT has developed a reputation as the scrappy upstart among contending Hyperloop initiatives. Hyperloop Technologies, based in Los Angeles, assembled an all-star team. NatGeo counted[4] “Brogan BamBrogan, a key former SpaceX engineer; Jim Messina, the manager of President Obama’s 2012 re-election campaign; David Sacks, who worked under Musk at PayPal, and Shervin Pishevar, investor in ridesharing company Uber who prodded Musk to go public with his Hyperloop vision.”

As has long been the case with newfangled technologies, critics have not been shy about questioning the mechanics behind Hyperloop’s eye-popping goals. Beyond simple safety concerns — a leak in the vacuum created to make it move so fast would be disastrous — critics have claimed that “solar panels alone cannot generate the energy needed for 800mph travel. Even if successful, the issue of the enormous g-forces experienced by passengers when travelling at the Hyperloop’s top speed will also need to be addressed,” Alphr reported[5].

But for now, the intrinsic appeal and excitement of Hyperloop has brought enough momentum to carry the project forward. Looking to capitalize on the interest, Ahlborn has even teased the ultimate in futuristic transportation: a free ride. As Endgaget noted[6], he revealed “he’s considering a business model that apes what we see in free-to-play mobile games. The CEO is kicking around the idea that the travel itself would either be free or dirt cheap, with passengers charged for a series of as-yet undisclosed upgrades. Of course, since we’re still a decade or more away from a commercial version of the system, there’s plenty of time for him to change his mind.”

In the meantime, Hyperloop’s innovators have already encountered initial opposition from a potentially more formidable foe than armchair critics: California’s own government. “Transit authorities in California reportedly balked at the idea,” according to Fast Company, “concerned about earthquakes and the fact that such a system would have to span all kinds of terrain and privately owned land.” With his I-5 corridor test track, Ahlborn has begun to answer at least one of those objections.