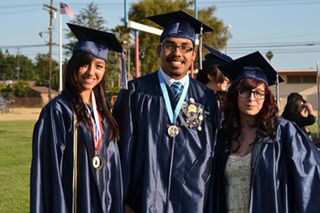 Even amid scandals over its iPads-for-all program and battles over leadership, the Los Angeles Unified School District has been able to cite some good news on the academic front in recent times. In April, district officials trumpeted the release of state data showing that the graduation rate for the high school class which graduated in June 2014 was 70.4 percent, up from 68.1 percent for the class that graduated in June 2013. It was the fourth straight year the percentage had increased[1].

But now a huge threat has emerged to this picture of academic progress — one that could drop the graduation rate to 25 percent in the nation’s second-largest school district. It’s a 2005 policy adopted by L.A. Unified’s board that required that beginning in 2017, degrees would only go to students who had a C average or better in 15 college-prep classes. The “A to G” program, as it’s known, is emerging as a huge hurdle for most students. In May, Los Angeles Unified board members heard a staff presentation in which officials estimated that three-quarters of current 10th graders would not be able to meet this standard.

As a result, the LAUSD board is meeting Tuesday to discuss how to weaken the rules. Two changes appear likely:

The first change is much more significant than a similar proposal that board member Monica Ratliff suggested last month: Allowing LAUSD students to graduate if they averaged a C grade in the college prep classes. It would effectively overturn the key goal of the 2005 reform: making a high school degree a far more significant academic achievement. Instead, a student would continue to be able to graduate by avoiding an F in any mandatory class.

Yet at least one school board member says these changes don’t really amount to reversing course. Here’s what Steve Zimmer told KPCC[2]:

Zimmer said the recession and district budget cuts created large class sizes and a lack of tutoring and other services to support students toward graduation. The proposals would ensure that enough resources are provided to help students succeed, Zimmer said. … Students in the class of 2016 and 2017 would not be required to meet the C requirement, if the changes are approved.

Zimmer doesn’t see the changes as rolling back academic standards.

Educators have often talked about “reform fatigue,” as school districts frequently tinker with or make major changes in their policies to try to improve academent achievements. “With each reform, teachers and administrators have lost a little more trust in the city, state, and federal officials setting the agenda — not to mention a lot of their time,” noted a March piece[3] on education reform in Slate. What L.A. Unified’s board looks poised to do is more like “reform abandonment.”

Board member Ratliff, however, said last month that she simply didn’t believe the A to G program was fair.

“Of course, I don’t want our graduation rates to plummet but this isn’t about that,” Ratliff said on KPCC’s Air Talk[4] program.

The board meeting starts at 1 p.m. Audio and video streaming are available here[5]. The proposed changes in the A to G program are the 39th item on the agenda[6] and will be discussed after several public hearings on reauthorizing certain charter schools, so it’s unlikely to be taken up until well into the meeting.