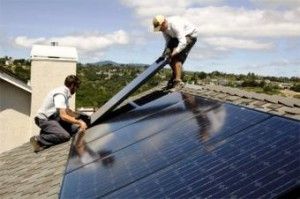 [1]Placing a big bet on solar power and new regulations, state officials have rolled out ambitious new requirements aimed at slashing energy use in newly-constructed homes.

“Buildings built in California starting in 2016 will have to comply with the nation’s toughest energy conservation standards,” the Central Valley Business Times reported[2]. “The California Energy Commission has unanimously approved building energy efficiency standards that it says will reduce energy costs, save consumers money, and increase comfort in new and upgraded homes and other buildings.”

In single-family homes, that would amount to a drop in energy use by almost a third, relative to 2013 standards, the CVBT noted.

The New Residential Zero Net Energy Action Plan, as it has been dubbed, aimed[3] “to establish a robust and self-sustaining market so that all new homes are zero net energy (ZNE) beginning in 2020.” Critics have reiterated longstanding objections to a statewide push of this kind, especially around the prospect of rising energy costs.

“The most complex issue will be valuing the homes, which will cost more upfront,” according[4] to Greentech Media. “Currently, the CPUC is quoting an extra $2 to $8 per square foot after incentives. There will likely need to be incentives or creative utility billing, especially if the homes are providing demand-side services as the CPUC envisions. The CPUC says that the utilities are on board and will have to evaluate locational benefits of having net-zero homes on the system.”

As Greentech Media noted, planners have built in some would-be loopholes designed to make progress on ZNE without imposing the new standards too quickly: “Homes can be ZNE-ready, rather than actually being energy-neutral. That could mean they are solar-ready, for instance, but perhaps don’t have solar panels already installed.”

But even supporters of the plan have cautioned that executing on its goals may be a daunting challenge. At the Huffington Post, one analyst noted[5], “as California’s clean power goals rise, new capacity could begin to slow.”

“Some planned large projects are now on hold due to financial problems. Others face environmental challenges, such as threats to bird flyways and desert habitats. Large-scale solar plants, particularly those using solar thermal technology, are losing appeal to investors as photovoltaic panel prices plunge. And utilities, having largely reached their current renewable procurement targets, have few new projects in the pipeline. What’s more, the federal solar investment tax credit program for new utility projects drops from 30 percent to 10 percent after 2016, and ends completely for individuals.”

Nevertheless, optimism among policymakers and activists has remained high — largely because of the role of technological innovation centered in California. Apple and Google have embarked on so-called “grid-scale” renewable energy projects, while Tesla has pushed into the home energy storage business.

But some experts have implied that the problem of rising energy costs could best be addressed by linking up the net-zero energy industry with the zero-emission automobile industry. “A recent California study estimated that utility companies could earn $2.26 to $8.11 billion in net revenues from large-scale commercialization of EVs,” as reported[6] in Fortune. “This is sufficient to allow utilities to invest both in installing charging infrastructure and return some of the revenues to their customers in the form of lower rates.”

By supplying ubiquitous EV charging stations, observers surmised, utilities could eventually recoup electrical power from cars embedded into the same flexible grid as homes. “The value of having a flexible load on the grid will grow even further with higher amounts of wind and solar,” Fortune continued. “Electric vehicles can be programmed to charge during peak solar or wind generation periods, preventing this valuable electricity from being wasted. In the future, electric vehicles could increase their value by putting electricity back into the grid as well[.]”