As use of California’s groundwater supply reaches an all-time high, the state’s drought-induced sinking has put California land at historic lows, with little to no government attention. 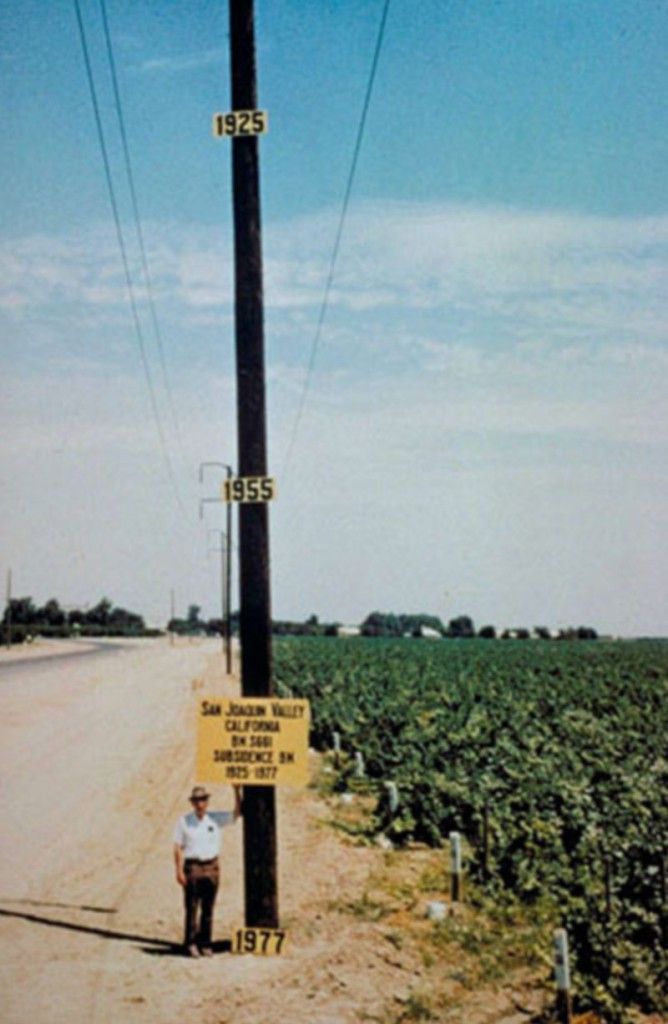 [1]Nathan Halverson, a reporter with Reveal News from the Center for Investigative Reporting, writes[2] that scientists last summer “recorded the worst sinking in at least 50 years”:

“But the extent of the problem and how much it will cost taxpayers to fix are part of the mystery of the state’s unfolding drought. No agency is tracking the sinking statewide, little public money has been put toward studying it and California allows agriculture businesses to keep crucial parts of their operations secret.

“The cause is known: People are pulling unsustainable amounts of water out of underground aquifers, primarily for food production. With the water sucked out to irrigate crops, a practice that has accelerated during the drought, tens of thousands of square miles are deflating like a leaky air mattress, inch by inch.”

California sources[3] nearly 60 percent of its water supply from groundwater, which is causing this sinking or “subsidence” – the formal term describing the sinking of land resulting from groundwater extraction. The U.S. Geological Survey says the sinking is starting to affect much of the state’s infrastructure, including bridges, canals and highways.

In 2013, USGS published[4] a study on subsidence in the Delta, which is one of the main sources of fresh water in California. The report says the Delta is “the heart of a massive north-to-south water delivery system,” where much of the water “is pumped southward for use in the San Joaquin Valley and elsewhere in central and southern California”:

“The leveed tracts and islands help to protect water-export facilities in the southern Delta from saltwater intrusion by displacing water and maintaining favorable freshwater gradients. However, ongoing subsidence behind the levees reduces levee stability and, thus, threatens to degrade water quality in the massive north-to-south water-transfer system.”

Halverson reports the sinking in some parts of California had ballooned to a “rate of about 1 foot per year[5] in 2012.” And even if we stop pumping groundwater immediately, geological survey scientist Devin Galloway tells CIR, “the damage already done to aquifers now drained to record-low levels will trigger sinking that will last for years, even decades.”