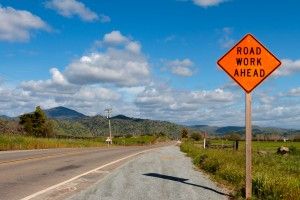 [1]In a move that handed Sacramento Republicans a sudden share of power, state legislators finally turned their attention to California’s deteriorating infrastructure.

In recent years, California’s roadways have fallen into what analysts often agree is terrible shape. “Our streets and highways are in horrible condition and need at least $296 billion during the next five years for already ignored construction and repair projects,” the OC Weekly complained[2], noting that “a reported 87 percent of road pavement is rated as ‘at risk’ or ‘poor'” according to current estimates.

“To the chagrin of Republicans,” the Weekly continued, “the Democrat-controlled Legislature has proposed an upcoming $168 billion budget with a measly $2 billion for roads when experts say the state should be spending at least $8 billion annually.”

But to the delight of Republicans, that gap — and California’s budgeting rules — has granted them a fresh round of political relevance.

The Golden State GOP cultivated a very public interest in California’s roads. In addition to providing the party with a coveted way to connect with voters, the stance has supplied Republicans with an unaccustomed degree of political muscle in Sacramento. To grease the wheels for the state budget, Gov. Jerry Brown hived off the state’s nearly $60 billion in road troubles for a special legislative session. But “additional revenue is impossible without support from Republicans because it requires a two-thirds vote in the Legislature,” as the Los Angeles Times noted[3].

A rush of plans

Although Assembly Republicans have offered[4] billions more than those in the state Senate, both proposals adopted several similar paths to get there. On the chopping block, the Times reported, was cap-and-trade revenue, “recently expanded to include transportation fuel. In addition, they want to tap existing fees on truck drivers, which were redirected to the general fund during the state’s budget crises.”

“Republicans in the Assembly also want to eliminate 3,500 jobs at Caltrans, the state transportation agency, that legislative analysts identified as unnecessary. Thousands more vacant positions across state government would be cut as well, and all of the savings would be put toward roads.”

According[5] to U-T San Diego’s Steven Greenhut, Assembly Republicans would pull $1 billion directly from cap-and-trade monies, estimating that an additional $1 billion in infrastructure spending could be saved from the better fuel efficiency that could result from better roads.

The Assembly GOP would also strip[6] the California Transportation Commission from the Executive Branch, according to Capital Public Radio. Earlier, Assembly Republican Leader Kristin Olsen, R-Modesto, had telegraphed her caucus’s plan, urging[7] that high-speed rail money be reallocated to correct the state’s problems with existing infrastructure.

The party hasn’t remained fully united on the issue of revenue neutrality. For some, the special session hasn’t turned out to be quite the boon the party imagined. “Many Republicans argue that the governor and Democratic leaders put together a balanced budget that doesn’t raise taxes – and then offloaded this big missing piece to a special session as a way to build support for tax increases,” as Greenhut recounted[8].

The behavior of some in the party gave ammunition to Republican critics. “Senate Republican leader Bob Huff of San Dimas expressed interest in a proposal from Sen. Jim Beall, D-San Jose, that includes a new annual $100 fee to owners of electric cars, making up for the fact that they don’t pay any gas tax,” as the Times noted[3].

Along with a host of co-authors, Huff has also introduced[9] legislation that would constitutionally require transportation taxes to be allocated toward transportation expenses. Nevertheless, his willingness to raise additional revenues raised the ire of influential state conservatives.