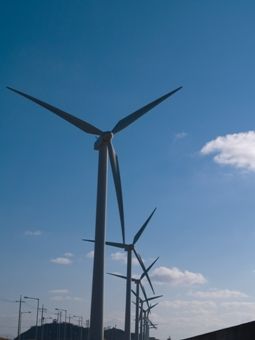 Gov. Jerry Brown and big majorities in the California Legislature are all aboard with plans to have the state get 50 percent[1] of its electricity from renewable sources by 2030.

The National Renewable Energy Laboratory goes even further. As Vox reported[2] last month, it no longer believes there is any technical barrier to “a grid running on 100 percent wind and solar.”

This view counters the conventional wisdom. A comprehensive study by Cornell electrical engineer Eilyan Bitar[3] released earlier this year is highly skeptical that a grid system could be reliable without traditional “bulk power generation.”

All of which makes recent developments with California’s wind- and solar-power industries of acute interest. According to a global-energy blog[4] run by McGraw-Hill’s financial information branch …

In the first quarter of this year, with unseasonably warm dry weather tamping down wind flows in California, the amount of power generated by the state’s 44 wind farms fell off by around 35% compared to the first quarter of 2014, according to data filed with the US Federal Energy Regulatory Commission and the Energy Information Administration … .

While that was a first, clear signal that wind power had its distinct draw-backs, but two more recent dates — June 8 and 9 — seemed something like days of reckoning for renewables in California.

As demand for power rose and generation surged to meet it, rain, widespread cloud cover and poor wind pushed down the amount of wind and solar generation available to help meet the demand. Because of the shortage of renewables, prices surged.

‘Microgrids’ meshing with the ‘Internet of things’

This relative unreliability is why Bitar thinks the answer going forward is “microgrids.” This is from a physics[5] blog run by Cornell:

In an intelligent grid, this variability in supply would be balanced through the coordination of flexible distributed energy resources at the periphery of the system. Power would be produced locally and consumed locally, giving rise to self-sufficient communities or cities, called microgrids. Such an approach would decrease the need to transmit bulk power hundreds of miles to counterbalance fluctuations in renewable sources.

The architecture of such a system, which requires sensors and actuators in appliances, electric vehicles and the like, isn’t the hard part, Bitar said. The hard part is the design of algorithms to efficiently manage the deluge of information produced by those sensors in order to coordinate the simultaneous control of millions of distributed energy resources on fast time scales.

This in turn suggests the “Internet of things”[6] that Americans have been told is just around the corner — in which an online network constantly monitors and links humans, appliances and machines — would also be an extension of the electricity grid.

Privacy advocates would then have a new area to worry about — individual energy use being subject to 24-7-365 monitoring.

An essay[7] in the Guardian earlier this year raised such concerns.