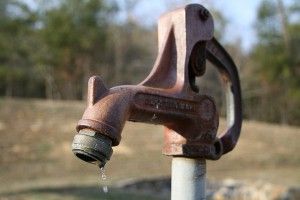 [1]As Californians are left reeling from an ever-worsening drought, state and federal regulators struggle to recast the rules surrounding water use — and the infrastructure designed to deliver it.

In conversations with the New York Times, analysts warned[2] that the drought’s lasting effects will require the federal Bureau of Reclamation to “completely rebuild a 20th-century infrastructure so that it can efficiently conserve and distribute water,” although dizzying costs make that challenge daunting.

According to the Times, “a new water infrastructure across half of the United States could cost taxpayers billions of dollars,” deepening partisan divides over how much the drought indicates a broader change in the national and global climate. Already, the disagreement has put the Bureau in the political crosshairs. While Democrats would push reform in one direction, Republicans have shoved in the other:

“Representative Kevin McCarthy, the majority leader and a Republican from California’s parched inland, has criticized the bureau’s efforts in his state. Lawmakers like Mr. McCarthy are particularly furious that the bureau and the State of California continue to direct scarce water into rivers to support fish habitat, even as farms wither and families struggle to make do with less water.”

McCarthy and other Republicans have recently unveiled a drought relief package all but certain to pass the House of Representatives. But it faces a stiff challenge in the Senate, where Democrats prefer an earlier proposal put together by members of their own party. The bill’s only sponsoring Democrat, Rep. Jim Costa, told[3] the Sacramento Bee he hoped it would “be the basis for conversations” with Sen. Dianne Feinstein, D-Calif., and “continue to focus attention on the crisis, as a way to get a response from the Senate.”

The frustration came amid new data showing that California’s crash conservation program has actually permitted widespread spikes in consumption, despite Gov. Jerry Brown’s order to slash urban use by 25 percent.

The several central and southern counties tallying significant increases have blamed everything from accounting errors to burgeoning prison populations for the numbers, according[4] to the Los Angeles Times. “In Kern County, California City reported a puzzling 28% increase in consumption, while the Casitas Municipal Water District, in Ventura County, appeared to have boosted water use 26%,” the Times reported. “Likewise, the San Gabriel Valley city of El Monte reported a 10% increase in water use, while the San Joaquin Valley city of Reedley reported a 9% jump.”

The difficulty in accounting for the changes underscored the budgetary strain California’s new rules have placed on water agencies and the municipalities that must work with them. “Water departments are increasing rates and adding fees because they’re losing money as their customers conserve,” the Associated Press reported[5]. “They say they still have to pay for fixed costs including repairing pipelines, customer service and enforcing water restrictions — and those costs aren’t decreasing.”

“It’s not clear precisely how widespread drought-related rate increases are because no government agency or association tracks them. But agencies across California are reporting they’ve taken steps to tap customers to offset the losses of conservation. Residents in the San Francisco Bay Area, for example, are seeing higher bills after the region’s largest water wholesaler increased the price of water 28 percent to make up for lagging sales.”

While regulators and policymakers face a painful transition, at least some in the private sector have sought out a different kind of fix. One startup, Sustainable Water and Innovative Irrigation Management, has pivoted to California from its Colorado home.” Developed in partnership with the US Department of Agriculture and Colorado State University, SWIIM started out in Colorado, where it’s been deployed on about 10,000 acres,” Mother Jones noted[6]. “With the West Coast drought in full swing, the company is now putting some 80 percent of its resources into California. It will roll out pilot projects this summer in Kern County and in the Sacramento, Coachella, and Imperial valleys.”