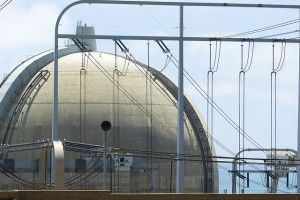 California’s powerful, politically connected giant electricity utilities are used to getting their way and to getting help when things go wrong.

But in San Diego County, there’s been slowly building opposition to the PUC’s November approval of a plan in which $3.3 billion of the $4.7 billion cost of closing both the reactors at the San Onofre nuclear power plant is borne by ratepayers. Edison is 80 percent owner of the plant, while SDG&E owns the remaining 20 percent. As part of the plan, there has been no formal PUC investigation into the problems that led to the plant being shuttered.

The PUC, Edison and SDG&E maintain that the deal was in keeping with established practices in the utility industry and that there is nothing unusual or onerous about how the costs were divvied up. They note that the initial proposal from the PUC staff was modified to make it more friendly to ratepayers.

However, the circumstances of the initial negotiations — in which key decisions were made on March 26, 2013, in a secret meeting between then-PUC president Michael Peevey and an Edison executive named Stephen Pickett in a hotel room in Warsaw, Poland — continue to produce headlines and ongoing civil and criminal investigations. Peevey’s home was raided by FBI agents early this year.

The PUC’s resistance to independent investigators is also adding to the fire. Utility officials have long resisted releasing basic information about the San Onofre decision-making process.

But beyond the veneer of scandal, many San Diego County ratepayers keep returning to the circumstances that led to San Onofre’s closure.

Both reactor units [went offline in] January 2012, after a small leak of radioactive gas prompted shutdown of one unit; the other was already offline for routine maintenance.

Unexpected wear was found in the metal tubes that carry radioactive water in all four of the plant’s steam generators, two generators for each reactor.

The steam generators were installed between 2009 and early 2011 in a $670 million operation.

That’s from the O.C. Register.

‘Where do we find accountability?’

Dozens of letter-writers and online commentators argue that Mitsubishi, the Japanese conglomerate that made the defective generators, should be forced to pay damages beyond refunds it has already agreed to do in litigation.

These critics also wonder how Edison and SDG&E can only be socked with 30 percent of the San Onofre closure costs when their management of the plant’s upkeep was so poor that huge, costly, essential new machinery started faltering almost immediately.

A reporter for Northern California’s KQED caught the public’s mood[3] in a visit to San Diego this spring:

Quinn calls [the $4.7 billion] settlement illegitimate because the Public Utilities Commission allowed it without a full investigation of who was responsible for the plant’s failure and who should be held accountable.

“Where do we find accountability?” Quinn said. “The steam generators — why did they fail? These are simple questions that should be asked.”

‘I’m not here to answer your goddamned questions’ 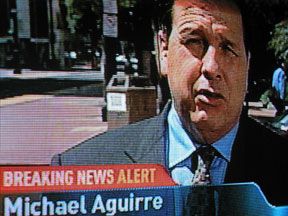 The San Diego trial lawyer who is targeting the PUC and utilities in a lawsuit [4]— former City Attorney Mike Aguirre — opposed the San Onofre deal from the start. As the Union-Tribune reported, this led to an ugly turn[5] at a May 2014 PUC board meeting.

The president of the California Public Utilities Commission swore and angrily refused to answer questions last week at an unusual hearing at which he was asked about communication with his former employer, Southern California Edison.

The president, Michael Peevey, was questioned by former San Diego City Attorney Mike Aguirre about his role if any in reaching a proposed settlement between utility companies and consumer advocacy groups regarding $4.7 billion of shutdown costs for the San Onofre nuclear power plant.

Aguirre asked Peevey if he had any meetings with Edison, the company he once headed, regarding the settlement.

Such contact would be inappropriate because Peevey and the commission are supposed to be impartial arbiters at public proceedings regarding whether the settlement is fair to all parties.

Aguirre is making the case that it’s a bad deal for utility customers to cover $3.3 billion of the shutdown costs, as proposed in the settlement.

“I’m not here to answer your goddamned questions,” Peevey told Aguirre. “Now shut up — shut up!”

Eight months later, emails obtained by the Union-Tribune revealed that Aguirre’s speculation was correct: Peevey had met with the Edison executive in Poland in 2013 to talk about San Onofre’s closing and who would pay for it.

A federal lawsuit filed this week accuses two top Edison International executives of harming shareholders by failing to disclose secret meetings with California regulators regarding a $4.7 billion settlement of costs for the failure of the San Onofre nuclear plant.

The lawsuit alleges that Edison CEO Ted Craver and Chief Financial Officer Jim Scilacci failed to disclose private communication with decision makers at the California Public Utilities Commission, including a March 2013 meeting at a luxury hotel in Poland.

Meanwhile, civil and criminal investigations of the PUC continue. There are no indications, however, that indictments or fines will be announced anytime soon. The PUC is still deciding which documents to provide investigators, and utilities have also balked at some requests for information.