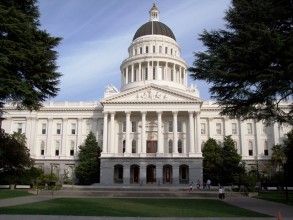 “Blocking discussion in this manner is unfair, undemocratic and soils the decorum of the Assembly,” said Harper, who is the vice chairman of the committee, in a July 8 press release[4].  “I was sent here to represent the concerns of the voters of my district and chairman Hernández shut down my ability to speak for who I represent.

“Our state’s underemployment rate is overwhelming and the bill being rammed through our committee would make it harder to hire. We are sent here to debate policy that impacts the lives of Californians, not shut down dissenting points of view. The chair’s actions were offensive and disrespectful today, not just to me, but to Californians who want jobs and deserve to know the impacts policy will have on their chances of employment.”

‘At this time I’m calling the vote’

During the committee discussion, when Hernández recognized Assemblyman Evan Low[8], D-San Jose, to speak, Hernández said that Low would be followed by Harper. But after Low finished questioning Leno, Hernández decided he had heard enough.

Harper said, “Mr. Chairman, I’d like to have comments.”

Hernández did not acknowledge him, instead saying, “At this time I’m calling the vote.”

Harper said, “You’re going to cut off people in the queue?”

Harper said, “I think this is totally inappropriate.”

At that point Hernández raised his voice and said to Harper, “You’re inappropriate and out of order. Madame Secretary, call the vote.”

When the vote was taken Hernandez shouted “aye.” Harper did not respond when his name was called, but later changed his non-vote to “no.” After the committee passed the bill, Harper said, “Mr. Chairman, I think the cutoff on debate is completely embarrassing.”

Harper said, “I think it’s completely inappropriate. It just shows you how this is being rammed through the state of California.”

After Hernández thanked and dismissed Leno, he turned to Harper and said, “Don’t be yelling in this committee like that.”

Harper responded, “No you cut me off.”

The meeting ended with perfunctory business a couple minutes after Harper’s mic was removed.

Hernández did not respond to a request for comment. The Sacramento Bee reported[9] on July 9 that Assembly Speaker Toni Atkins[10], D-San Diego, met with Hernández and Harper, during which Hernández “expressed regret.”

But in a Sacramento Bee op-ed[11] on Sunday, titled “Committee chairman’s behavior is beyond the pale, even for Capitol,” Harper wrote, “It is unfortunate that Hernández has been completely unapologetic about his behavior. Using such tactics to silence an opposing point of view is not only unfair, it is undemocratic. I fear that these actions will set a dangerous precedent that it is OK for committee chairpersons to prevent their colleagues from speaking on behalf of their constituents.

“These outrageous bullying tactics would be roundly condemned if they took place in a school or in the workplace. These actions are a stain on the institution and have no place in the people’s House. They are contrary to the Legislature’s action in recent years to enact strong anti-bullying laws and mandate harassment training.”

Hernández’s bullying style was also evident at a meeting in March[12] during debate on Assembly Bill 67[13], which mandates double pay for employees working on Thanksgiving and Christmas. The bill’s author, Assemblywoman Lorena Gonzalez[14], D-San Diego, criticized and admonished one of the bill’s opponents, the California Chamber of Commerce[15]. She accused it of waging a war on Christmas and “attempting to elicit support based on erroneous readings of the law and misguided arguments about the separation of church and state.”

Chamber representative Jennifer Barrera[16], who had already testified against the bill, asked Hernández for the opportunity to respond to Gonzalez’s charges. “May I respond to those comments since they were directed right at the Chamber of Commerce?” she asked.

Hernández said, “I’m going to defer to my colleagues on that one since I have not given that opportunity on any other bill.”

But Hernández did not defer to one of his colleagues, Assemblyman Jim Patterson[17], R-Fresno, who was in the process of questioning Gonzalez and asked that Barrera be allowed to respond. “There is a request by the Chamber to clarify this,” Patterson said. “I think that’s a reasonable request. And I would like the prerogative of asking the Chamber to respond.”

Hernández dismissed him, saying, “I’m not going to give you that opportunity at this time.” He did not allow Barrera to respond to Gonzalez’s charges at any other point in the meeting either.

Aside from the verbal fireworks at the end of last week’s meeting, much of the debate on the minimum wage increase bill was similar to that at the Senate Industrial and Labor Relations Committee hearing in April[18].

Leno argued that an increase in the minimum wage is necessary in order to lift California workers above the federal poverty level. “We live with the largest population of people living in poverty of any state,” he said. “The highest percentage of any state with residents in poverty. That has many reasons and causes. But a significant driver of that is that it is currently legal to pay subpoverty wages in California.”

In addition to opposition by business groups, who warn that a 63 percent pay increase over three years for hundreds of thousands of workers will hurt businesses, cost jobs and increase prices, SB3 is also opposed by the California Department of Finance[19]. Increasing the minimum wage will cost state government $394 million in the 2015-16 fiscal year, $959 million in 2016-17 and $3.4 billion in 2017-18, according to a DOF legislative analysis[20].

“Further, Finance notes the net impact of an increased minimum wage on California’s economy and state budget is likely to be negative,” the DOF said. “For the economy, losses from higher production costs to businesses would be partially offset by the consumption boost from wealthier minimum wage workers, but would overall lead to slower employment growth.

“This would lead to slower personal income growth, and an anticipated negative impact on taxes collected, especially since the tax structure in California is highly progressive and lower income individuals pay little to no income taxes. Sales taxes under the provisions of this bill may increase, but they are not anticipated to increase enough to offset lower personal income taxes. Although the state would save some money on lower provision of benefits under some state funded programs, the increased expenses from paying state workers would more than offset those gains.”

SB3 passed the Senate, 23-15 on June 1. It will next be considered by the Assembly Appropriations Committee.