Now, the nonprofit arms of these billion-dollar businesses are looking to gain a special exemption from the state’s rules on charitable fundraising.

A proposal speeding through the legislature would grant nonprofit organizations affiliated with professional sports franchises a special exemption from the state’s laws on charitable raffles. 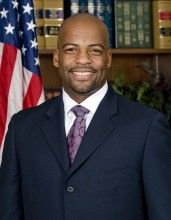 Proponents of the special perk for sports franchises say that it encourages more philanthropic giving.

“Results of 50-50 charitable raffles in over 29 states have been tremendous,” Senator Hall, the bill’s author, recently testified before[2] the Assembly Governmental Organization Committee. “This measure will supplement great charitable work done by professional sports franchises throughout the state.” 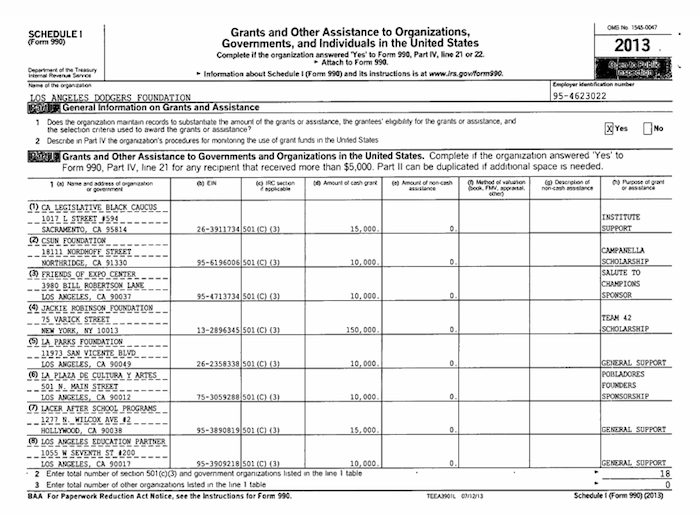 According to its most recent tax return, the Los Angeles Dodgers Foundation has contributed $15,000 to the California Legislative Black Caucus[3]. The current vice-chair of the Black Caucus is none other than Senator Isadore Hall, III — the author of SB 549.

“When you go from a 90-10 split to a 50-50 split, you’re moving away from charity to something more like a lottery,” David Quintana, a lobbyist for the California Tribal Business Alliance told the Los Angeles Times last year[5]. “This is a huge change.”

In some cases, the sports nonprofits lose money on lavish fundraising events. The Los Angeles Lakers Youth Foundation spent $100,000 to a rent a golf course for a fundraiser that lost money, according to the nonprofit’s most recent tax return.

The Oakland Athletics Community Fund spent thousands of dollars on promotional-type events and fundraisers, including $65,525 for a golf tournament, $53,611 for a “bowling bash” and $9,654 for player appearances, according to the organization’s most recent tax return[6]. That doesn’t include the $98,774 spent on “grants” to the Athletics Investment Group, LLC, the company that owns and operates the Oakland Athletics. The grants were for tickets to A’s home games, yet the organization did not acknowledge a relationship between the two entities in its tax filings. 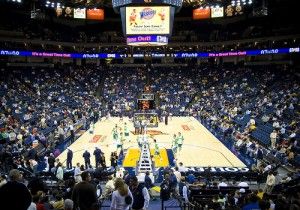 [7]A statewide coalition of charitable organizations says the legislation provides a special perk to a small group of nonprofits.

“SB 549 lets professional sports teams and their foundations play by different rules than the rest of us,” CalNonprofits, a statewide advocacy group that represents more than 10,000 nonprofit organizations, wrote in opposition to the bill. “All other nonprofits – school bands, symphonies, humane societies, rotary clubs and food banks, and all the rest of us – would be limited to the current 90/10 rules, whether they prefer it or not. And that’s not fair.”

Because the bill amends a voter-approved initiative, it requires a two-thirds vote of both houses — giving Republican lawmakers rare power to influence public policy. The Republican Caucus’ analysis of the bill has raised concerns about the bill, especially its proposal to add a new $5,000 fee.

“There is a fee contained within this bill,” a Republican staff analysis of the bill warns lawmakers. “The bill requires eligible sports franchises, manufacturers and/or distributors of raffle related products and/or services to pay a $5,000 annual fee, in addition to a $100 fee for every individual raffle conducted at an eligible location to the DOJ in order to cover the administrative and enforcement provisions of the bill.”

Not a single lawmaker — Republican or Democrat — has voted against the bill.