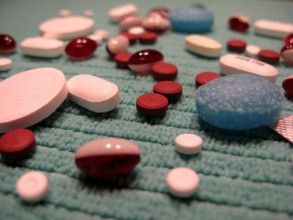 [1]A prescription drug bill, Assembly Bill 339[2], would save money for many with chronic medical conditions. But critics warn that it also will increase insurance premiums for everyone else and make it harder for insurers to negotiate with pharmaceutical companies for lower-cost drugs.

“AB339 is designed to ensure consumer access to vital medications,” said the bill’s author, Assemblyman Rich Gordon[3], D-Menlo Park, on the Assembly floor June 3. “Californians with cancer, HIV/AIDS, hepatitis, multiple sclerosis, epilepsy, lupus and other serious and chronic conditions, need high-cost, specialty drugs. Today, consumers with these serious health conditions can be asked to pay as much as $6,600 for a month’s prescription for a single drug. AB339 limits what a consumer pays to $275 per 30-day prescription.”

The updated version of the bill reduces that to a $250 copay limit for a 30-day supply, with the exception of those with bronze insurance plans who would be liable to pay up to $500 for a 30-day drug supply.

“The California Health Benefits Review Program[4], which analyzed AB339, found that there’s a preponderance of evidence from studies that persons who face higher cost sharing for prescription drugs are less likely to maintain meaningful levels of adherence than persons who face lower cost sharing,” said Gordon. “And poor adherence to prescription drug therapy for chronic conditions is associated with higher rates of hospitalization and emergency department visits.”

The actual effect of cost sharing may be more nuanced, according to the legislative analysis[5] prepared for the Senate Health Committee’s July 15 hearing: “[T]here is some evidence that the effect of cost sharing may differ depending on the specific disease and specific specialty drug. There is a preponderance of evidence that cost sharing has stronger effects on use of health care services by low-income persons compared to high-income persons. However, this was not observed in a recent well-done observational study from Massachusetts.”

Gordon responded to the concern that his bill would increase insurance premiums by pointing out that CHBRP “found that premium increases are estimated to be only 0.3 percent for enrollees with group insurance and 0.7 percent for enrollees with individual market policies. As demonstrated by this data, the benefits of this bill increasing medication adherence far outweigh any negatives. Join me in supporting these important consumer protections, which ensure that Californians are better able to afford their prescription drugs and that drug benefit designs are not discriminatory.”

He was in fact joined by most of the Democrats in the Assembly where the bill passed, 48-30, with no other discussion. It also passed along party lines in the Senate Health Committee, 7-2, after witnesses testified to its pros and cons.

“This is a bill about basic consumer protections,” said Sawait Seyoum, representing the advocacy organization Health Access California[6]. “A recent study found that the average consumer has about $2,300 in liquid assets in their checking or savings account. Today we expect the average constituent to pay over half of what they have in their account for a single prescription in the first month.

Touting the effectiveness of medicinal improvements was Anne Donnelly, representing Project Inform[7], which advocates for those with HIV and hepatitis C.

“Over the years since we started working on HIV, people with HIV have started moving from a life expectancy of about 43 days to a normal life span, and we have ended the transmission of HIV from HIV-infected moms to their babies,” she said. “And that’s in large part due to the effectiveness of HIV drugs. Now we have an HIV drug that when used appropriately can stop new infections.

But the bill might actually have the opposite effect, according to Nick Louizos, representing the California Association of Health Plans[8].

“Our opposition to this bill is fairly simple,” he said. “Legislatively designing health benefits increases premiums. We can legislatively create the best benefit packages in the world, but if no one can afford them, that’s pretty useless from our perspective. This has been demonstrated time and time again. The independent analysis of the introduced version of this bill does show premium increases of close to $400 million on individuals and employers.”

That analysis, which was done before the bill’s scope was reduced to include only prescription drugs providing essential health benefits, estimated it would result in a $162 million increase in employer-funded premiums in the private insurance market and a $216 million premium increase by individual purchasers.

But there may be big costs associated with the current version of the bill. The analysis states that it may include “unknown, potentially significant fiscal impact on the private health insurance market. By requiring coverage of single-tablet regimens and extended release prescription drugs, carriers lose negotiating power, leading to unknown higher drug costs.”

Louizos said that the state health benefit exchange, Covered California[9], has estimated “that over a three-year period, prices could increase by 3 percent. And that’s a pretty significant percentage from our perspective, considering all the cost drivers in the health care system.”

“[It} appears to require the brand pharmaceuticals that have been on the market the longest, and thus most often prescribed, would get favored status,” he said. “In some cases this would be the most expensive, in some cases it may not be. So we don’t see the reasoning behind that. We think it’s just going to require redoing the [cost] tiers on an annual basis based on what is the most popular drug.

“Another issue: AB339 essentially forces coverage of more expensive brand HIV pharmaceuticals that are in single-tablet form when less expensive brands or generics in multi-tablet form are available. As the Assembly Appropriations Committee analysis noted, the burden of proof to refuse coverage of these drugs, according to the bill’s provisions, appears very high, essentially meaning they would have to be covered. This provision would completely eliminate any incentive for the manufacturers to negotiate on plan formularies.”

The only committee comment came from the chairman, Sen. Ed Hernandez[11], D-West Covina:

“I agree that there are conditions that need to be dealt with, especially very expensive ones. I believe that we need to make sure that the consumer doesn’t have to go bankrupt.

“But there’s something that I think we really need to really have a discussion. There’s an underlying problem, and it still deals with overall controlling costs to the health care system – and that’s the increasing cost of prescription medications. At the end of the day what’s going to happen is that you’re going to have lower payments to the consumer, but yet if you have escalating drug costs, guess what, all of those costs are going to be passed onto the consumer in the form of premium increases throughout the entire system.”

AB339 will next be considered by the Senate Appropriations Committee.