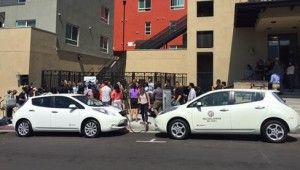 As many as 7,000 low-income Los Angeles residents could eventually take part in a state-funded electric car sharing program that rolled out last week.

State and city officials celebrated the soft launch of the endeavor — which aims to improve air quality by cutting carbon emissions — at an L.A. affordable housing complex.

City officials hope to establish as many as 100 vehicles as part of the pilot program, which the state is partially funding through a $1.6 million award. The city expects to use an additional $8 million “in in-kind city resources and private operator investment in equipment and operations,” according to L.A.’s  Sustainable City plan[2]. 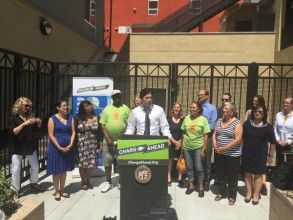 “Fighting smog and climate change so that our kids can breathe clean air requires more transportation options that don’t rely on dirty fossil fuels,” state Senate leader Kevin de León, D-Los Angeles, said in a press release[5]. “This electric car-sharing pilot project offers a glimpse of the future, and represents the type of shift in policy, infrastructure, and behavior that we need.”

Specifically, it will “provide affordable last mile/first mile solutions for low-income families and other residents who do not own a car or need a second car for trips requiring a light duty passenger vehicle,” according to L.A.’s  Sustainable City plan[2].

“Our EV car sharing pilot is a perfect example of how our state’s cap-and-trade dollars should be put to work: providing transportation options for Angelenos in need, and helping us achieve our clean air goals outlined in my Sustainable City plan,” Los Angeles Mayor Eric Garcetti added in the news release.

The program is formally called the Car Sharing and Mobility Options in Disadvantaged Communities Pilot Project. It is run by the California Air Resources Board, and originated last year after the Legislature and Gov. Jerry Brown signed two of de León bills, SB1275[6] and SB535[7], according to the Senate leader’s office. Those laws direct CARB to invest the state’s cap-and-trade revenue into programs that bring clean air and jobs to communities heavily impacted by climate change and poor environmental quality.