CA ‘conundrum’: Water use down, bills up 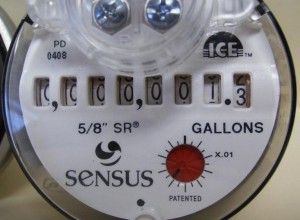 Californians reacted impressively to Gov. Jerry Brown’s late-spring call for major water conservation, cutting usage by 27 percent[1] in June. But many aren’t happy about it — because for millions of ratepayers, conservation hasn’t led to cost savings.

Newspapers around the Golden State have focused on this seeming contradiction.

This story[2] is from this week’s Orange County Register:

Folks feel that they’re being punished for conserving. But what else can the water agencies do to cover fixed costs, which don’t fluctuate like the rain? …

Southern California cities and water districts are selling less water now than they did back in 2003, but are bringing in much more money nonetheless, a Register analysis found. Rising rates are an integral part of that equation … . The cost of water has doubled and rates at most agencies have risen in recent years, and is expected to rise even more.

‘The financial logic is inexorable’

Whenever drought hits, Californians invariably do their part to save water. They cut back on watering lawns, shorten showers and fix leaks.

This conservation ethic has taken hold quickly during the current drought. Ratepayers in San Diego County and elsewhere in the state are meeting or often significantly exceeding their state-mandated reduction.

Now for the unpleasant but predictable sequel. As water use goes down, the rates charged are going up. And many of those good citizens, who are dutifully pitching in for the public good, are outraged. But the retail water agencies, who directly supply residential, business and agricultural customers, say they have little choice.

The financial logic is inexorable. If you sell less of something, to balance the budget you must either cut costs, raise the price, or a combination of both, the agencies say.

The Los Angeles Times also reported [4]on sharply rising rates in areas served by the L.A. Department of Water and Power, but without the context of recent conservation drives.

David Sedlak, a professor of civil engineering at UC Berkeley and a water infrastructure expert, suggested this issue is a little bit more complicated in an op-ed[5] for the San Francisco Chronicle:

Water utilities have an uncomfortable relationship with conservation. They prefer that we consumers gradually reduce per capita water use as our region’s population grows so they don’t have to make costly investments in new supplies. When we abruptly start cutting water use during a drought, the utilities fear the resulting plunge in their revenue. They have good reason to worry: During the last drought, the Los Angeles Department of Water and Power had to lay off workers when it experienced a $70 million revenue shortfall after customers answered the city’s call for conservation by decreasing water use by 30 percent.

Some of the blame for the misconception about the relationship between water consumption and the cost of providing water lies with how we are billed for water. To incentivize conservation, California’s utilities have created complex billing schemes in which rates go up when consumers use more than a reasonable baseline allocation of water. This is an effective way of rewarding conservation and making life a little easier for low-income families, but it feeds into the mistaken idea that water is a commodity rather than a fixed-price service.

But to consumers shocked by higher bills, just about any justification is likely to produce a sharp response or be dismissed as double-talk. Here’s how San Diego resident John Oliver responded to a Union-Tribune story about conservation forcing higher costs:

“And this is yet another reason why I refuse to cut my use below the level I want to use water at,” he wrote on Facebook. “Anyone who falls for this ‘There’s a drought, it’s terrible, we all have to do our part, but not the smelt or the almond farmers or the developers or the poor or the sick or the elderly or the illegal aliens’ nonsense is a fool.”