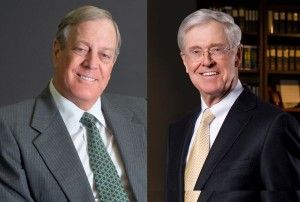 [1]Hosted by the organization bearing the Koch brothers’ name, Some 450 business leaders came together in Southern California to think through their policy priorities for 2016.

At stake was nearly $890 million in funds to be allocated through the end of next year, according[2] to the Associated Press. Although much of that sum was expected to flow into the coffers of the eventual Republican candidate for president, a potent irony pervaded the proceedings, relating to Jeb Bush. “The Kochs began their donor gatherings in 2003, a reaction to what they saw as out-of-control government growth when his brother George W. Bush was president,” as AP noted.

The confab took place at a scenic and secluded oceanfront hotel in Dana Point. A certain amount of privacy has long been standard operating procedure, with the Kochs themselves playing more of a behind-the-scenes role. “The Koch operation is not expected to formally back any candidate in the GOP primary,” as Kenneth Vogel observed[3] at Politico. “But the Koch brothers and many of their donors can still play kingmaker roles. In addition to the massive checks many are expected to write to the super PACs aligned with specific candidates, they also serve as bellwethers for other donors.”

Even before the event, scuttlebutt surrounded the field of Republican candidates. Not all were present. Rand Paul, who “underwhelmed donors” at a prior event, declined this time around, as Eliana Johnson reported[4] for National Review. One Koch official told Johnson “that Chris Christie wasn’t invited because the powers that be in Koch world think he has a crummy fiscal record in New Jersey.”

Nor did Donald Trump receive an invitation. (Trump would later mock the meeting on Twitter as an assemblage of would-be “puppets” lacking his own money muscle.)

That left the Koch brothers to sit down with Jeb Bush, Ted Cruz, Carly Fiorina, Marco Rubio and Scott Walker.

Although the attendees each had their chance to speak, few were out to make headlines. Marco Rubio, known for his hawkish approach to foreign policy, did use California’s sometimes idyllic isolation from the east coast political establishment to sharpen his rhetoric on Iran’s nuclear program. “Iran will be not just a nuclear weapon power, but will have the capability to deliver that weapon to the continental United States in less than a decade,” he said[5], according to Time. “I don’t think any of us wants to live in a country where a radical Shiite cleric in Tehran can have a nuclear weapon and an ICBM that can hit where we are sitting right now.”

But the weekend was not restricted to presidential politics. “Koch network leaders briefed some 450 donors, who pledge six-figure sums to become members of the Freedom Partners organization, on their policy and philanthropic goals for the 2016 cycle,” CNN reported[6].

The itinerary reflected an agenda more variegated than the Koch organization is often given credit for. “While the network has become arguably the most powerful force in Republican politics today, Charles Koch, in his welcoming speech, called out both parties for big spending, reckless foreign policy and corporate welfare,” Politico noted[7].

Sessions were varied. One, drawing hundreds, “focused on legislation that would limit mandatory minimum sentencing, as well as other forms of criminal justice reform,” according to CNN. “At an evening reception, the featured speaker was Dr. Michael Lomax, president of the United Negro College Fund.”

In fact, some present at the meeting suggested that too much attention had been paid to the relatively glitzy and competitive race for the GOP nomination. Longtime donor Art Pope told Politico that the spotlight belonged a bit deeper in the weeds. “The main point of this weekend’s seminar is not the elected officials or the candidates. In fact, it’s not about candidates at all. It is more about policies and issues,” he said.