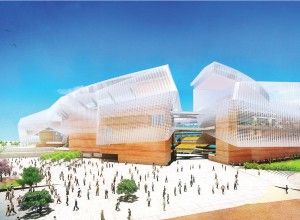 [1]San Diego Mayor Kevin Faulconer and San Diego County Supervisor Ron Roberts on Monday unveiled architectural renderings, a financing scheme and a 6,000-page[2] draft environmental impact report for a $1.1 billion, 68,000-seat NFL stadium to keep the Chargers from going to Los Angeles County to share a to-be-built stadium with the Raiders in Carson. The hope is to place the proposal before San Diego voters in January, thus meeting an NFL deadline for the city to have a firm stadium plan in place before the league considers putting a team or teams in the Los Angeles area in a vote of team owners early next year.

Mark Fabiani, the veteran Democratic political strategist and crisis-management specialist[3] who has long been the point man for team owners on stadium questions, immediately denounced the plan, as ESPN reported[4]:

Fabiani criticized the “hastily prepared” EIR, saying, “The Chargers have been clear from the start that the franchise will not be the city’s guinea pig for this inevitably ill-fated legal experiment.”

“Remember, these are the same politicians who told us, with disastrous results in court, that the convention center expansion could be financed by a vote of the hoteliers rather than a vote of the people,” Fabiani, a former deputy mayor of Los Angeles, said in a statement.

But Fabiani and the Spanos family, owners of the team since 1984, also couldn’t have been happy with the details of the financing proposal. An informal stadium task force that formed earlier this year with the mayor’s blessing issued a financing plan that was more generous than the plan touted by Faulconer and Roberts.

The Voice of San Diego, while generally skeptical of the official proposal, also noted [6]three ways the deal offers protections to taxpayers not recommended by the informal task foce:

Monday’s plan … says that the Chargers should be on the hook for:

• Operating and maintaining the stadium, which is a huge loss for city taxpayers now at Qualcomm[7].

• Any cost overruns on the construction of the new stadium.

• Any failure of $188 million in personal seat license sales pegged toward stadium construction to meet projections.

This plan suggests that Faulconer, Roberts and the other officials and consultants who shaped it are not in panic mode because of a fear the Chargers are sure to leave. Instead, they are making a calculated gamble that the other 31 NFL team owners will choose the St. Louis Rams franchise as the league’s Los Angeles centerpiece and pass on the Chargers/Raiders plan, leaving the Chargers to come back to the negotiating table. This was judged to be the most likely of nine possible scenarios in an April analysis [8]by Sam Farmer of the Los Angeles Times, who has provided several scoops in recent years in his coverage of the Los Angeles-Oakland-San Diego-St. Louis NFL quadrangle.

The Rams and Stan Kroenke, the NFL’s second-wealthiest owner, are well along[9] the way toward breaking ground for a $1.8 billion stadium project next year in Inglewood, with environmental clearances already in place and strong support from city elected officials and local special interests.

And Kroenke has already signaled that he will move even if the Rams’ proposed relocation fails to win the league-mandated support of three-quarters of the 32 teams — using a strategy borrowed from the Raiders. This is from a January item[10] by the well-connected Mike Florio on the Pro Football Talk website:

Kroenke has informed the mayor of Inglewood on multiple occasions that he’ll move the team with or without the approval of the other clubs.

That would be an aggressive, risky move.  If Kroenke moves without approval, he’d be entitled to no financial assistance from the league, and his stadium would be blocked from hosting Super Bowls. He also would avoid paying the relocation fee.

The matter could end up in court, as a sequel to the barrister’s brouhaha between the Raiders and the NFL in the 1980s, arising from the league’s efforts to keep the Raiders from moving to Los Angeles. The Raiders eventually won a $34.6-million judgment, which reportedly was settled for a payment of $18 million in 1989[11].

The NFL is likely to signal in coming days what it thought of San Diego’s official presentation to the team owners committee in Chicago. But as CalWatchdog noted Monday[12], the fact that the league is eager to begin selling[13] 2016 season tickets for a Los Angeles team to be named later suggests that most owners are panting at a return to the nation’s second-largest metropolitan area after being gone since 1994.