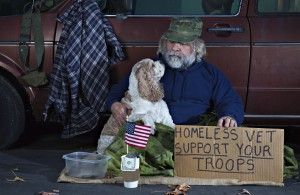 [1]California’s two U.S. Senators have thrown their weight behind new legislation meant to get California veterans off the streets.

At the center of the proposals is the Department of Veterans Affairs’ Los Angeles campus, located on the west side of town near the 405 freeway. As the Los Angeles Times reported[2], a January legal settlement paved the way for the campus to pivot toward housing vets — and away from lease arrangements extended in the past to “corporations, the private Brentwood school and other non-government entities.”

Under the new regime envisioned by Sens. Dianne Feinstein and Barbara Boxer, the VA would receive the authority to “enter into leases with local governments and nonprofit groups to provide veterans with shelter supplemented by medical and other services,” according to the Times. As Southern California Public Radio noted[3], education and training were among the additional services anticipated.

In recent years, the VA has been wracked by scandals offending Republicans and Democrats alike, with blame cast at the Obama administration, Congress and the VA bureaucracy itself. Now, however, the VA has put its own stamp of approval on the new bill; according to SCPR, it offers the VA — currently mired in a multibillion-dollar funding shortfall and juggling unfinished projects — an opportunity to “create new housing in West L.A. much faster than the agency could on its own.” In a statement, SCPR noted, the VA asserted that passing the Feinstein-Boxer legislation would “greatly enhance” its “ability to end Veteran homelessness in Greater Los Angeles.”

L.A. Mayor Eric Garcetti has vowed to ensure all veterans are off the city’s streets by the end of this year. “In January, the mayor’s office announced 3,375 homeless veterans were housed in L.A. in 2014, and an estimated 3,154 homeless veterans remain on the street,” as the Los Angeles Daily News has observed[4].

California has recently become emblematic of increasing rates of homelessness in major urban areas, as the two Senators, along with Rep. Ted Lieu, D-Torrance, noted in their letter to the chairmen and ranking members of the House and Senate Veterans’ Affairs committees. “There is a critical need for long-term supportive housing on the West Los Angeles campus, and enhanced use leases would allow the department to work with community and state organizations toward the goal of ending veteran homelessness in Los Angeles,” they wrote, according to the Daily News. “As you may be aware, Los Angeles is home to the largest population of homeless veterans in the country, which is simply unacceptable.”

From Downtown to westside neighborhoods such as Venice, altercations involving homeless persons and police — sometimes resulting in death — have made headlines in Los Angeles. Recently, in San Pedro, controversy erupted over the appearance of small wheeled shacks designed to supply the homeless with shelter that could evade permitting regulations. L.A. City Councilman Joe Buscaino warned “that the city needs more permanent housing” instead of structures that would “ultimately become nuisances,” the Times reported[5].

In addition to the situation in Los Angeles, events unfolding in other Southland locales have also attracted attention. This month, formerly homeless veterans in Huntington Beach pressed ahead with a lawsuit challenging construction regulations they claim adversely affect prospects for housing. “The litigation comes in response to the Huntington Beach City Council on May 4 adopting an amendment that blocks the development of affordable housing in the Beach-Edinger Corridor,” as the OC Weekly reported[6]. “The veterans, commission and their lawyers contend the Beach-Edinger Corridor Specific Plan is in direct conflict with the city’s own General Plan Housing Element, which was approved by the California Department of Housing and Community Development in 2013.”