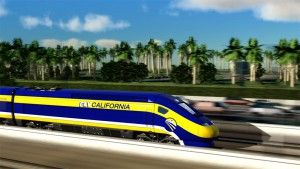 [1]A court ruling is expected within weeks on whether certain documents should be considered in a lawsuit against California’s High-Speed Rail Authority.

The state has argued for limiting the evidence to documents, such as business plans and environmental reviews, from formal Authority proceedings. Project opponents are arguing for broadening the scope of evidence to documents related to decisions that they say were made outside the public’s eye.

Opponents are attempting to halt the $68 billion dollar project by showing that the Authority cannot achieve the trip times promised in the taxpayer bond funding the project, that the voters did not approve the planned system of sharing tracks with commuter and freight rail, and that the financial viability of the project just doesn’t add up.

Superior Court Judge Michael Kenny is weighing whether to consider as part of the case two documents in particular: a travel time analysis prepared by opponents, and declarations submitted by the opponents in 2013. A hearing in Tos, Fukuda and Kings County v. California High-Speed Rail Authority was held late last month in Sacramento.

The Attorney General’s office argued against considering the expert declarations. The declarations, which include a statement from the former head of the high-speed rail project, question the viability of the rail’s promised travel times as well as the overall finances of the project. They also question the legality of the blended system of sharing tracks.

The AG’s office says the declarations should have been presented as commentary for the Authority’s 2014 business plan in order to be allowed in the administrative record.

Example: The Authority’s attorneys submitted a declaration from one of its chief program managers, engineer Frank Vacca. In that declaration[2] Vacca says the authority can make the time required in Prop. 1.  This declaration was never debated and discussed at any board meeting.

The AG’s office says that the declaration was not an official decision by the Authority; it only offered proof that the Authority could achieve the two-hour, 40-minute time requirement.

Opponents have requested but not received the computer model inputs that inform the rail authority’s time analysis. They say because they have not been able to analyze those numbers, the public did not have a chance to debate or challenge the thinking behind the analysis.

Opponents gave another example of an informal decision reached without public discussion: to limit train speed to 125 mph in urban areas. The opponents said the authority decided on the speed limit, then presented the decision as a done deal to the public. Opponents submitted records of those presentations, to 40 cities, and the attorney general’s office did not oppose allowing those records to supplement the Administrative record.

On Aug. 13, 2013, project opponents received a favorable ruling for the first part of their case, which challenged the adequacy of the Authority’s funding plan. That ruling was overturned on appeal July 31, 2014, when the court said it was too early to decide the funding issues.

The appellate court determined that opponents would have to wait to challenge the funding plan when construction was imminent and money was about to be spent. To date, the Authority has used only federal funds to prepare to construct early phases of the project in the Central Valley.

A hearing on the merits of the case is set for Feb. 11.