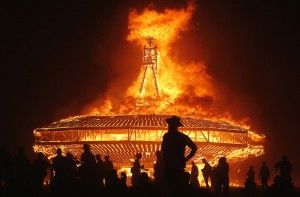 [1]A nerve-wracking negotiation with federal officials has been resolved in favor of the Burning Man festival, saving the organization behind the event from shelling out big sums for luxe accommodations.

The controversy, which made national news, pitted festival organizers against the Federal Bureau of Land Management, the agency that has the power to renew or withhold the necessary permits for so-called burners to convene at the Black Rock Desert site that draws many Californians to the sands of Nevada.

After making what were widely interpreted as exorbitant demands, the Bureau of Land Management withdrew the new requirements at the last minute, drawing sighs of relief from organizers including Marian Goodell. “We’ve made tremendous progress over the past six weeks to agree on common sense solutions that meet BLM’s needs and ensure the health and safety of those supporting and participating in the Burning Man event,” said Goodell in a statement reported[2] by The Hill.

“That being said, there’s an important amount of work to do after the 2015 event,” she continued. “We’re all committed to further discussion regarding the permitor–permittee relationship and what is required for BLM to properly administer the permit.”

In scrapping their plans to make Burning Man foot the bill to put up the officials sent to oversee the event,  BLM “also announced that it granted Burning Man its special recreation permit for the 2015 event,” the Reno Gazette-Journal noted,[3] allowing up to 70,000 people on site from the 30th of August to the 7th of September.

The Nevada office of the BLM insisted that it had maintained necessary standards despite backing down. “We took a very hard look at what is essential to maintain core operational needs to provide appropriate health, safety and environmental safeguards on the playa,” said spokesman Stephen Clutter, according to the Gazette-Journal.

According to the original list of demands, BLM staff would have received a laundry list of special perks and costly amenities. In order to receive its permit, Burning Man would have been responsible for building, at its own expense, a separate compound for officials including “refrigerators, washing machines, vanity mirrors, flush toilets and food choices including ice cream and steak,” as the Las Vegas Review-Journal observed[4]. (Regulators had even specified that Choco Tacos had to be available 24 hours a day, according to documents obtained[5] by the Sacramento Bee.)

In fact, however, top BLM officials themselves caught on to the million-dollar ploy. “BLM officials, including Deputy Director Steve Ellis, took notice,” according to The Hill. “Ellis sent a public memo in June urging the agency to work closely with Burning Man organizers to reduce costs and reconsider demands.” According to the Bee, “BLM Director Neil Kornze has called some of the requests ‘lavish’ and ‘outlandish.'”

All told, the added expenditures would have tacked some $1 million onto Burning Man’s budget — a big increase from its typical permit costs, which have ballooned to $4 million since the event first put down Nevada stakes in 1990; the tab increased[6] “substantially over the past four years, despite the unchanged population cap. In 2011, Burning Man paid $858,000; in 2012, $1.4 million and in 2013, $2.9 million.”

The attempt at quasi-extortion underscored the degree to which festival organizers have found themselves at the mercy of federal regulators. For political and cultural allies, longstanding suspicion toward the federal government was poised to increase in the wake of the ordeal. Burning Man, as Reason’s Brian Doherty suggested[7], “survives only by paying off and adjusting to the demands of the federal government that ostensibly ‘owns’ the land the event is held on.”

For now, the delicate balance was set to hold. “BLM staffers will have the same caterer used by Burning Man organizers, and they’ll stay in the town of Gerlach as they have in the past, although the BLM will still have an on-site command center where officials can coordinate safety, security and environmental efforts,” according to the Bee.