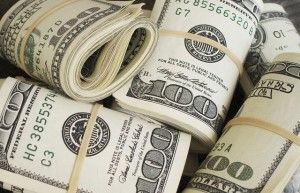 California taxpayers paid out big bucks to state workers in 2014.

How much? More than the Gross Domestic Product of 100 countries, according to new data published by the State Controller’s office. In 2014, more than 650,000 state employees earned a total of $32 billion in wages and benefits.

The staggering amount of payroll data is matched by generous salaries and benefits provided to the top echelon of employees. Nine hundred sixty-nine state employees earned more than the President of the United States – with thousands more earning more than a quarter million dollars per year.

Topping the list of state agencies with the highest average salary is California’s stem cell agency. The average salary for employees of the California Institute for Regenerative Medicine (CIRM) is $117,627 per year. That’s 21 percent more than the salaries of state lawmakers, who earn $97,197 per year[1].

Despite having the highest average salary for any state agency, the stem cell agency boasts that it is “a good steward of the people’s money.”

“CIRM is a good steward of the people’s money – independent reviewers agree that we are lean, well-managed and effective,” the agency claims on its website[2]. “We are delivering economic results for Californians – both at the state level, and in dozens of communities in every part of the state.”

After the state’s stem cell agency, the only other state agencies with average salaries in six-figures are employees of the State Supreme Court, Sierra County Superior Court and California Court of Appeals, according to the State Controller’s database.

Progressive Democrats have near universal control over state government, but you wouldn’t know it from the average pay of some state agencies.

The lowest paid average workers represented agencies focused on the environment, women and people with disabilities. According to the state’s 2014 payroll data, the average salary for the 11 state employees at the California Commission on Disability Access[3] was just $15,213 per year, slightly more than the $14,494 average salary paid[4] to the four employees at the Commission on the Status of Women.

The small number of employees arguably skews the data. However, that’s not a factor for the 3,500 employees of the California Conservation Corps[5], who earned an average wage of just $12,973 per year. Easily one of the most efficient state agencies, the department responsible for “protecting and restoring California’s environment and responding to disasters” paid out less than $2,000 per year in average retirement and health care costs per employee.

In contrast to workers at the California Conservation Corps, coaches at state universities earned big bucks. Last year, the Top 10 state employees all earned more than $1.6 million each. This millionaires club was dominated by coaches at the UC campuses.

Excluding employees of the UC system, the highest salaries were paid out to investment officers with the state’s retirement systems. CalPERS’ chief investment officer took home nearly $740,000 in 2015 — 40 times more than an employee earning the state’s $9 per hour minimum wage. To put the compensation for CalPERS’ highest-paid employee into perspective, it would take just 10 days to match the annual salary for the state’s in-home support service workers[7], who provide care and support for the elderly and people with disabilities.

The Top 10 highest-paid state employees, excluding the University of California system, are:

California’s state payroll data has been viewed more than 8 million times since disclosure began in 2010. The controller’s office will provide more updates later this year, which will include more state and local agencies.