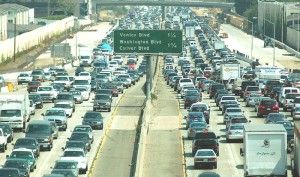 [1]Watching the maneuvering to pass a transportation revenue package in the special session, I can’t help but think of the observation by that great philosopher Yogi Berra who said: “It’s déjà vu all over again.” The legislative scrum over a legislative roads fix is similar to the struggle to find common ground before Proposition 30 was put on the ballot.

Remember those days at the beginning of Governor Jerry Brown’s third term. Brown tried to pick off a few Republican votes to secure the two-thirds margin he needed to put a tax increase measure on the ballot. In return, the Republicans who were courted by Brown sought reforms to the spending side of the budget, particularly, a spending limit and a rainy day fund. Pressured by public employee unions, Democrats in the legislature showed no interest in accepting these reforms.

The effort to achieve a compromise package went nowhere. The governor then turned to the ballot, working with union groups already pushing a tax increase initiative to create Proposition 30.

On transportation in the special session, Democrats put forward a series of tax and fee increases. Republicans countered with a package of spending proposals using cap-and-trade dollars, redirecting current transportation revenues for the roads, re-doing Caltrans employment and reconsidering the high-speed rail project.

Republican senate leader Bob Huff said there is no support for tax increases in his caucus. Democratic majorities in committee killed the Caltrans and high-speed rail proposals. Democratic Senate President Pro Tem Kevin de León said taking money from cap and trade for the roads is not a serious proposal. “There is no nexus between greenhouse gas emissions and potholes,” he said.

Rob Lapsley, president of the California Business Roundtable, which supports a compromise that would include both tax increases and re-directing cap-and-trade funds said, “Both sides will likely experience some pain, both sides will need to have some wins.”

At this stage there seems no give to accept any part of the plan put forth by the other side.

Negotiations will continue. But will history repeat itself if no deal is struck?

The forces behind the tax and fee increases could play the initiative card. With supporters in labor and big business, and if the governor endorses an initiative, they certainly have the wherewithal to qualify a measure for the ballot. But, how likely is it that voters would embrace a 12-cent per gallon gas tax increase and higher car registration fees if such a proposal qualified for the ballot?