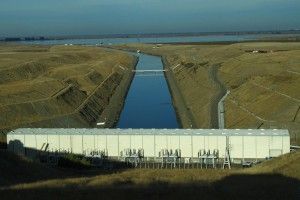 The Banks Pumping Plant looking toward the Bay Delta, where tunnels are planned that could protect fish. Photo courtesy of www.hcn.org

California taxpayers may be liable for picking up part of the $15 billion cost of the proposed Delta tunnels project, an economist warned at a legislative hearing last week.

The project consists of two 40-foot diameter, 30-mile-long pipes transferring water from the Sacramento River in the north Delta to pumping plants in the south Delta. From there the water is pumped to San Joaquin Valley farms and southern California homes and businesses.

Where Will Funding Come From?

One quarter of the project’s cost is expected to be provided by a $60 annual rate increase on Southern California water users, according to Dr. Jeffrey Michael[2], director of the Center for Business and Policy Research at the University of the Pacific[3].

The rest of the cost is planned to be provided by Central Valley farmers. The problem for those farmers is that the upfront costs for tunnel construction would total about $160,000 per acre, Michael told the Senate Select Committee on the Sacramento-San Joaquin Delta[4] on Aug. 18.

“That’s multiples above the value of farmland in the San Joaquin Valley,” he said. “Even great almond orchards with a reliable supply don’t rate anywhere near that amount. Worse yet, one of the financial problems with tunnels are drought years. When you get into an extended drought and the tunnels aren’t producing any additional water for the farmers, they are already financially constrained … yet they have to come up with $1 billion a year or more in debt service payments.

Michael continued, “I don’t see any way how it’s viable without some sort of taxpayer subsidy or backing.”

If there is a taxpayer subsidy, it could be expensive. Assemblyman Jim Frazier[5], D-Oakley, warned that the estimated $15 billion price tag could be as high as $70 billion by the time the project is finished. “We know that it’s going to go over projected amounts,” he said.

Legislative analyst Rachel Ehlers[6] told the committee that the Legislature should be concerned about the state having to financially support the project, which has been dubbed the California WaterFix[7].

“The administration is envisioning that water contractors will pay for the bulk of costs for constructing the WaterFix,” she said. “But are we sure those contract terms protect the state from any cost overruns? Are there other costs that could materialize? What about costs for ecosystem restoration related to the proposed tunnels or other conditions in the Delta? How will this interact with state responsibilities for that?

“So [you should be] thinking about where the funding might come from and what risks there may be to the state. It’s important for the lawyers to get in the weeds for that to make sure that the state is protected.”

The informational committee hearing was designed to answer the question, “Are the tunnels good for California?” But, unlike most legislative informational hearings in which panels of witnesses testify for and against an issue, there was only one panel at last week’s hearing. And all of the witnesses, along with the Delta and Bay Area legislators and audience speakers at the hearing, were opposed to the tunnels project.

Their concern is that the taking of water from the north Delta would result in decreased water flows to the heart of the Delta, resulting in further damage to an already fragile and unhealthy ecosystem and increased salinity in the drinking and irrigation water for about 500,000 Delta residents.

They are not mollified by assurances from state officials that the tunnels project would actually improve conditions in the Delta.

“We can’t just cross our fingers, hoping for the best in the Delta,” said Gov. Jerry Brown in an April 30 press release[8]. “Fish populations are at an all-time low. Bold action is imperative. We’ve listened to the public and carefully studied the science. This revised plan is the absolute best path forward.”

The tunnels project will “accelerate restoration of the Delta’s ecosystem and fix the state’s aging water infrastructure,” the press release said. “The revised plan substantially improves the health of California’s fisheries, increases water reliability and addresses the uncertainty of climate change.”

The tunnels project does include 30,000 acres of Delta habitat restoration along with another 16,000 acres of habitat mitigation related to the tunnel construction. But that’s a significant decrease from the 150,000 acres in habitat restoration that had been planned in a previous incarnation of the project. In addition, a previous 50-year habitat preservation commitment has been eliminated due to uncertainties such as the potential impacts of climate change.

[9]An environmental scientist, Dr. Christina Swanson[10], former president of the western division of the American Fisheries Society[11], told the committee that reducing the freshwater flow in the Delta would exacerbate an already disastrous situation for the ecosystem.

“The ecosystem is highly degraded,” she said. “And virtually all of the native fish populations, particularly those that live in open water habitats, are declining and have been declining for decades to either record low levels or near record low levels. This includes delta smelt, longfin smelt, split-tails, starry flounder. So we definitely have a problem here.

“The primary cause, because it’s the primary physical and ecological driver in this estuary and ecosystem, is the alteration and large scale reduction in freshwater flows that flow into the Delta, through the Delta and out of the Delta into the estuary. That reduction is largely the result of man-made water management operations, storage on the rivers and diversion from the rivers and in the Delta.”

Craig Wilson[12], the state’s first Delta Watermaster[13] and a former attorney for the State Water Resources Control Board[14], proposed an alternative to the tunnels project. It would take water from the west Delta, resulting in shorter tunnels, combined with a gate that could be closed if the Delta water became too salty or contaminated along with a desalination facility.

Wilson said that “the present conveyance system is the worst of both worlds. It is not very efficient in moving water from the north to the south, and it’s been very destructive.”

But he also doesn’t think the tunnels project is the solution. “I agree that the $15 billion price tag is grossly understated when you think about the amount of material that has to be excavated and put somewhere. Most of the benefits to the tunnels accrue to the exporters to the south and not the other parts of the state, the Delta and others.”

“Southern California is looking for reducing our dependence on the Delta to the maximum extent possible,” she said. “We are heavily investing in recycled water.”

Sacramento County Supervisor Don Nottoli[16], who is the former chair of the Delta Protection Commission[17], responded that the Delta levees could be upgraded for $2-4 billion, much less cost than the tunnels project.

“That investment over time could not only armor the system in a way that is environmentally friendly, but also [help] on the climate change aspect of it because you can raise levees over time,” he said. “There’s a viable way to do it. It won’t happen overnight, but much more quickly than if you were to build a tunnel.”

Too Little, Too Late?

It remains to be seen whether last week’s anti-tunnels hearing and the alternative Delta improvement proposals will prove to be too little, too late. But they definitely are as far as the Metropolitan Water District of Southern California[18] is concerned. That district, which provides water for nearly 19 million people in six counties, is eager to get the tunnels project moving.

“We are reaching the end of a long, winding road,” said MWD General Manger Jeffrey Kightlinger in a July 9 press release[19]. “Metropolitan and other public water agencies have invested nearly a quarter billion dollars in this process because California simply had no other plan to reliably deliver water to two-thirds of California and to restore the Delta.

“Today represents the last planning milestone before producing a final plan for Metropolitan and the other agencies to consider. We applaud the bold leadership of Governor Brown in pursuing this necessary project. A million hours of planning must result in a final plan that is good for the California economy and environment. Everyone loses with the continued status quo.”

The press release was issued upon the recirculation of the environmental impact report[20] for the tunnels project, which has been designated as Alternative 4A. The public comment period on that report has been extended to Oct. 30.

“The two-month extension gives the public, government agencies, and independent scientists more time to consider refinements and changes made since last summer to the plan that seeks to secure California’s water supplies and improve ecosystem conditions in the Sacramento-San Joaquin Delta,” said a Department of Water Resources press release[21].

“The Delta is the West Coast’s largest estuary and is the hub of the state’s water distribution system. It provides water to 25 million of California’s 38 million residents and 3 million of roughly 9 million irrigated acres of farmland. The Delta also harbors several threatened and endangered species.”

Comments should be emailed to [email protected][22].