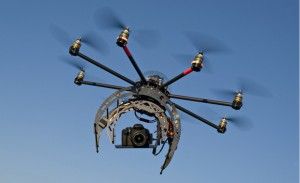 [1]The fate of California’s private drones will be decided by Gov. Jerry Brown, who must choose whether to sign divisive legislation headed to his desk.

The bill cleared both chambers of the state Legislature “despite bipartisan concern about regulating the budding drone industry,” Courthouse News reported[2]. “If signed by the governor, the bill would make it a trespass violation to fly an unmanned drone over private property without consent.” Any drone flying below 350 feet above private property without “express permission” would run afoul of the would-be law.

Drone industry figures and pro-tech activists have warned that excessively restrictive regulations would throw a monkeywrench into the explosive, lucrative and potentially very useful application of UAV technology. In a joint statement reported by Courthouse News, the Association for Unmanned Vehicle Systems International and the Consumer Electronic Association lambasted the bill. “SB142 would damage California’s leadership and handcuff innovation, just as this largely California-based and dynamically expanding industry is poised to bring major job growth to the state — adding roughly 18,000 new jobs and more than $14 billion in economic impact in the first decade once federal guidelines are implemented,” they warned.

In remarks supplied to Inc. magazine, Mike Winn, CEO of San Francisco-based software developer DroneDeploy, complained[3] that the bill “doesn’t meaningfully address privacy issues,” instead “arbitrarily reducing the ways drones can create value. We’d encourage California and other law makers to enforce existing laws that prevent trespassing and provide remedies for privacy violations and focus on the bigger issues in the states,” he suggested.

But Assemblyman Mike Gatto, D-Glendale, a supporter of the drone-curbing bill SB142 introduced by state Sen. Hannah-Beth Jackson, claimed that “the 50-foot zone between private property and federally controlled airspace could potentially be used as a corridor for commercial drones performing such functions as delivering packages,” McClatchy reported[4].

Drone politics have not divided neatly along party lines. In the Assembly, the bill drew opposition from both sides of the aisle.

In the absence of statewide guidance, law enforcement officials availing themselves of drones have had to improvise a public relations and public safety strategy.

In Ventura County, where the police force became the first in Southern California to receive FAA drone authorization, the sheriff’s department had to use “the reverse 911 system [in the] immediate area to notify residents we were about to deploy a UAV,” Cmdr. Chris Dunn told lawmakers in a hearing of the Joint Legislative Committee of Emergency Management, according[5] to the area paper the Moorpark Acorn.

“We do that so that, one, they won’t be shocked at the sight of the device in their area, and two, in hopes that they don’t interfere in the operation of the device by throwing things at it or trying to launch their own device in support of our mission,” he said.

Although SB142 would lift the burden of sorting out drone protocols from city and municipal officials, critics insisted that the problem of inconsistent, confusing and conflicting law would only be pushed upward. Without nationwide standards of guidance supplied by the FAA, “states will continue to set laws that will inevitably conflict with each other and will cause confusion about where and how operators can fly,” Christian Sanz, CEO of San Francisco drone manufacturer Skycatch, told Inc.

The FAA has slowly turned its attention toward the nationwide commercial use of drones. “In April, the Federal Aviation Administration granted Amazon authorization to test drones outdoors for its yet-to-be-launched Prime Air service, which hopes to use drones to deliver products to a customer’s doorstep within 30 minutes of an online order,” as the Sacramento Bee reported[6]. But the proliferation of drones among hobbyists, rather than corporations, has remained the foremost preoccupation of legislators in California and elsewhere.