Landmark climate legislation has run aground in Sacramento, hobbled by a rebellion among Democrats skittish of being tied by constituents to the potential economic impact of further mandated emissions cuts. 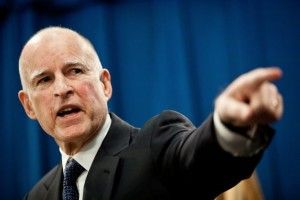 [1]The unanticipated struggle threw supporters of the bill, including Gov. Jerry Brown, onto the defensive, with lawmakers scrambling to appease holdouts without gutting their bill. “Senate Bill 32 seeks to ramp up the state’s emission reduction goals by cutting greenhouse gases to 40 percent below 1990 levels by 2030 and 80 percent below the 1990 mark by 2050,” the Sacramento Bee reported[2]. A raft of amendments tightening legislative oversight over the mandate-enforcing Air Resources Board was granted by Sen. Fran Pavley, D-Agoura Hills, but recalcitrant Democrats still balked, either abstaining or voting against the bill “on a 25-33 vote, with 21 members abstaining, that featured no debate. ”

Pavley and company get another bite at the apple, however, teeing up some potentially marathon negotiations. But the bill’s showing augured trouble for SB350, the biggest piece of emissions legislation on offer, according[3] to the San Francisco Chronicle. That bill “would set 2030 as the target for the state to cut petroleum use in half, boost energy efficiency in buildings by 50 percent and require the state to get half of its electricity from renewable sources,” the Chronicle noted.

The divide has driven Brown, often poised between the party’s liberal wing and legislative Republicans, into a different negotiating mode. Along with Assembly Speaker Toni Atkins, D-San Diego, he huddled with Senate leader Kevin de Leon, D-Los Angeles, for over two hours, as the Los Angeles Times reported[4], declining to answer reporters’ questions on the way out of de Leon’s office.

Aside from the substantial practical effects of the bill, its Democratic supporters were poised to work overtime to secure its passage because of its outsized symbolic and political value. Gov. Brown has emerged as one of the world’s most vociferous advocates for using policy to curb carbon emissions; around the country, policymakers and observers have placed great weight on California’s ability to demonstrate a workable model for taking that kind of aggressive action.

As the Wall Street Journal observed[5], “California produces about 1.5 percent of the world’s greenhouse-gas emissions. But the state has long been a bellwether on environmental regulations, passing landmark laws that are copied by other states and become templates for federal environmental rules.” Leading Democrats have been well aware of the level of expectation set for the latest round of emission legislation.

“The rest of the world is watching very closely what is happening in California,” de León told[6] the New York Times, “and I think so far they see a success story. Our economy has grown — we are adding jobs, and we are reducing our carbon emissions. Therefore it is absolutely crucial that this measure passes, because it will be a big blow to the rest of the states and the whole world if it doesn’t.”

But as the Times observed, those sentiments were not as broadly shared as he and Gov. Brown had hoped — especially within their own party. “The concerns have come not only from Republicans, but also from moderate Democrats who represent communities in central California,” the paper noted. “Many of these communities are struggling with high unemployment and slow economic growth.”

Despite his last-minute scrambling, Brown has expressed confidence that California will continue to lead in accordance with his policies regardless of how the legislation fares. But that reflected the ironic way in which changing emissions standards already hardwired into law could give wary Democrats an out in voting against SB32 and SB350.

As Paul Rogers noted[7] in the San Jose Mercury News, California will reach key environmental goals “even if it does nothing. That’s because of federal rules put into place in 2009 by President Barack Obama to double the gas mileage standards for new U.S. vehicles to 54.5 miles per gallon by 2025.”

What’s more, covering other ground within the scope of the new legislation could be achieved “simply by enforcing — and in some cases strengthening — existing laws passed over the last 15 years to boost electric cars, promote mass transit and reduce the amount of carbon in fuels, according to experts who have done the math,” Rogers argued.