CA may save enough to skip big water works 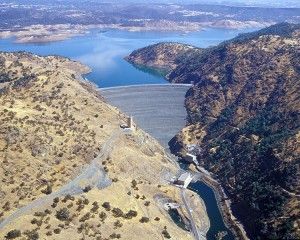 Demonstrating the simple power of reducing daily water usage, Californians have impressed regulators and policymakers by taking a huge bite out of statewide consumption. “The numbers reflect broad conservation success at a crucial time,” the Sacramento Bee reported[2]. “Last year, Californians used more water in July than any other month, mostly because of lawn watering in the summer heat. This year’s urban conservation efforts resulted in a savings of more than 74 billion gallons in July compared with 2013, more than double the amount of water that the entire city of Sacramento will use in a year.”

The data lent some unexpected credence to what seemed like an outlandish prospect just a year ago. While many analysts presumed that huge new infrastructure projects would have to be undertaken to respond effectively to the drought, now some have begun to suggest that mere saving may be enough.

According[3] to the Los Angeles Times, the sheer quantity of water saved — 414,800 acre-feet — measured favorably against some of the biggest and most expensive water storage facilities proposed to date. Both the expansion of Shasta Dam and a new Temperance Flat Dam on the San Joaquin River would open up around half that amount annually, the Times noted. Newsha Ajami, director of urban water policy for Stanford’s Water in the West initiative, told the Times “there are so many soft paths that we can take that might have a lot less environmental impact and be a lot less expensive, and still meet our future demand. This is probably a smarter tack than building more infrastructure, and moving more water around long distances.”

A massive new Delta tunnels project, promoted[4] by Gov. Jerry Brown and set to cost at least $17 billion, has recently become the center of one of the Golden State’s several water-driven controversies. Meanwhile, predictions of a powerful El Nino storm season have done little[5] to reduce ongoing jockeying between Northern and Southern California over water sources, water rights and water costs. And economists have begun to question whether California’s more limited access to water will begin to take a toll on the state’s pace of expansion, including many new housing developments authorized before the cutbacks began in earnest, according[6] to the New York Times.

The big savings have come with significant unanticipated costs, however — not always measurable in monetary terms. In what the Los Angeles Times called[7] “a paradox of conservation, water agencies say the unprecedented savings — 31 percent in July over July 2013 — are causing or compounding a slew of problems.”

“Sanitation districts are yanking tree roots out of manholes and stepping up maintenance on their pipes to prevent corrosion and the spread of odors. And when people use less potable water, officials say, there’s less wastewater available to recycle. Water suppliers, meanwhile, say the dramatic decrease in consumption has created multimillion-dollar revenue shortfalls.”

At the same time, California’s smaller cities have been thrown back on their heels by the stringent new regulations keeping consumption low. “State officials are starting to realize that some water mandates have the potential to cause serious economic problems for smaller communities such as Lemoore, Sanger, Hanford and Livingston,” the Fresno Bee reported[8].

The problem suggested a Catch-22, with the choice coming down to businesses in those areas making water cuts that result in cuts to jobs, or residents making up the difference by scaling back their consumption well in excess of the new mandates. “The cities are at or near the top of the state’s priority watch list to reduce water consumption, according to state Water Resources Control Board documents. All are missing the state’s reduction mandate by 10 percent or more.”