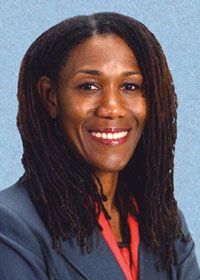 Both relate to what happened at the district’s School of Creative and Performing Arts, where her son graduated last year. Kim Abagat, a school counselor, came forward[1] to tell the Voice of San Diego that she had been suspended by the district for nine days for not writing a laudatory college recommendation for Foster’s son, who was ranked 100th in GPA in a class of 147. Abagat said she was punished for telling the truth.

School counselors are the ones who complete an evaluation form – attesting to students’ talents – which are then sent to prospective colleges.

In boxes where counselors rate students in terms of academics, extracurricular activities and character, Abagat listed Foster’s son as average or above average. But she checked a box that indicated there was “no basis” to recommend him to college.

Abagat said she thought she was doing the student a favor by not recounting in detail his documented behavioral problems.

The school’s 2013-14 principal has already blamed [2]Foster for her abrupt reassignment and eventual decision to leave San Diego Unified for a job in Los Angeles, sharply criticizing district Superintendent Cindy Marten and her staff for allowing Foster to throw her weight around at the school. But Abagat’s interview with Voice of San Diego and its research fill in the backstory of the lengths to which the district tried to make Foster happy.

The letter kicked off problems for Abagat. In the days after she submitted it, emails show, her access to the college application system was cut off. She could no longer send out recommendation letters on students’ behalf.

Another counselor, Megan Blum, wrote a new evaluation for Foster’s son to replace the negative one. Blum listed the student as “Outstanding (top 5%)” and “Top Few (top 1%).”

It was a remarkably different interpretation of the same student and grade point average.

Voice of San Diego followed up this bombshell with another one[3].

San Diego School Board President Marne Foster months ago distanced herself from a claim seeking $250,000[4] for the problems a negative college evaluation had allegedly caused her son.

It was the student’s father, John Marsh, who filed it. Foster told the Union-Tribune[5] she was “not a party to the claim” and would not comment on it.

The problem with that story? Marsh says he didn’t write it – Foster did.

“She brought me a blank complaint form and said, ‘Sign it.’ So I did. And I didn’t think twice about it until there was backlash,” Marsh said.

The claim, a necessary step before anyone is allowed to file a lawsuit against the district, said the college evaluation of Foster and Marsh’s son by a counselor at the School of Creative and Performing Arts was “willfully damaging,” and the family needed $250,000 to handle trauma and recoup losses from his rejection to many prestigious universities.

Earlier this month, Foster tried to quell another controversy by saying it was a bad idea to hold a fundraiser in July to help cover college costs of two of her sons — an event  she publicized using district resources. The fundraiser was held at a facility with a district contract and was attended by representatives of institutions that seek favor from the district, such as the head of the teachers union and organizations seeking to provide services to San Diego Unified, the state’s second-largest school district with more than 130,000 students and a $1 billion-plus budget.

Self-serving fundraiser a ‘mistake of the heart’

Foster initially depicted criticism of the fundraiser as politically motivated. But after community criticism built and the state Attorney General’s Office launched an inquiry [6]into the legality of a raffle held at the event, she changed her tune, calling [7]the fundraiser a “mistake of the heart.”

Foster, a community college teacher, was elected to the board in 2012.

Frank Engle[8], a parent of a student at the School of Creative and Performing Arts, first reported on Foster’s unusual interventions on his website in June 2014[9]. But the backlash didn’t begin until a May grand jury report [10]knocked weak ethical standards in the school district and cited Foster’s actions without naming her specifically.

Engle believes that far more blame should be given to Marten, the district superintendent, who has defended what happened[11] at the school while offering no public criticism of Foster. A stock photo Engle uses on his District Deeds website depicts Marten as Foster’s “accomplice.”