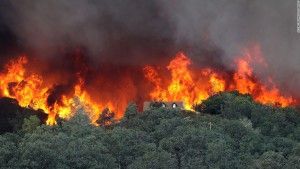 [1]Stinging from a surprise defeat in the Legislature over the scope of proposed emissions cuts, Gov. Jerry Brown has declared a state of emergency over California’s raging wildfires.

“His announcement, which will help expedite debris removal and waive fees to replace essential documents like birth certificates for those who’ve had to abandon their homes and belongings, came one day after four firefighters were injured,” CNN reported[2].

The tally of affected counties included Lake, Napa, Amador and Calaveras. The growth of the blazes has been rapid. One fire, the Los Angeles Times noted[3], “spread southwest by almost 20,000 acres over the last two days to 119,069 acres in the area of Sequoia and Kings Canyon national parks […] as extended heat and wind have fueled its growth[.]”

Brown also seized the opportunity to recast his environmental policies in terms that would raise the hackles of his Republican opponents. “What we see in Europe now, with mass migrations, that will happen in California,” he warned at a news conference in Sacramento County, as the San Francisco Chronicle reported[4]. “Central America and Mexico, as they warm, people are going to get on the move. It’s a real challenge.”

Although some analysts have cautioned that shifting climate conditions could prompt huge population displacements around the world, Europe’s current crisis was merely suggestive. “Heat, rising sea levels and drought are expected to disrupt populations around the world in coming decades, though the current refugee crisis in Europe speaks to other causes of migration,” the Sacramento Bee noted[5]. “Millions of people have fled Syria as a result of civil war.”

California’s fire season has given Brown a superficially powerful but subtly complicated way to dramatize the state’s environmental challenges. Although he insisted “that California has to be ready for more fires like the ones raging through Lake County, Gold Country and Kings Canyon National Park,” according to the Chronicle, he also noted “he has talked to fire officials who say they have never seen the kind of erratic behavior that fires are showing this year.”

Critics frustrated by Brown’s dogged attempts to slash California emissions pointed out how quickly the fires have likely negated the impact of recent cuts. Quoting a 2007 study by National Center for Atmospheric Research and the University of Colorado at Boulder scientists, the Wall Street Journal asserted[6] that “a severe fire season lasting only one or two months can release as much carbon as the annual emissions from the entire transportation or energy sector of an individual state.” One researcher, the Journal added, “estimated that southern California fires that burned for one week produced as much carbon dioxide as a quarter of the state’s monthly fossil-fuel emissions.”

Meanwhile, even some supporters of Brown’s emissions agenda took issue with California’s broader fire and forest management policies. In an editorial proclaiming that the climate has already changed, the Los Angeles Times addressed[7] a litany of questions to policymakers:

“Is the way we manage our forests, such as making them less dense by removing younger trees, adding to the possibility of massive fires? Are we making the right decisions about funding and fire prevention? Do land-use policies that allow development to push deeper into forested regions take into account the mounting danger of wildfires? Do we have adequate financial resources to fight the new normal fire season? Does it even make sense to fight fires to the same degree?”

Ironically, Sacramento has come under attack for its fire prevention fee, which doesn’t go toward actually fighting blazes themselves. “The Brown administration declined comment. But a recent state report says the fee raises about $75 million dollars a year for efforts like identifying evacuation routes and clearing brush,” Valley Public Radio observed[8]. “A taxpayers group has sued the state, alleging the fee is an unconstitutional tax. But a final ruling could take years.”