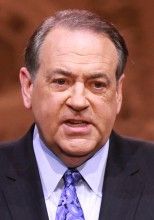 “My policies have never changed,” Huckabee said when asked whether he had changed his position on taxes. “I balanced the budget. You do what you have to do to balance the budget. I came in with a deficit of about $400 million; I left with a surplus of almost a billion dollars.”

An independent analysis by the Arkansas Democrat Gazette[1] in 2007 found that Huckabee’s governorship resulted in “a net tax increase of $505 million, a figure adjusted for inflation and economic growth, according to the state Department of Finance and Administration.”

The newspaper’s analysis also concluded that the average Arkansan’s annual tax burden was $2,902 the year Huckabee left office — nearly $1,000 more than his first year as governor. 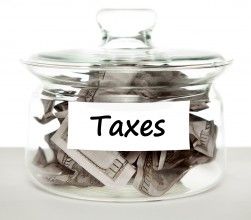 During Wednesday’s Republican presidential debate, the former Baptist pastor said that he supported a Fair Tax plan that would eliminate all taxes on production in favor of more taxes on consumption.

“I think we ought to get rid of all the taxes on people who produce,” he said during this week’s GOP debate[2] held at the Ronald Reagan Presidential Library. “Why should we penalize productivity? And it’s why I’m an unabashed supporter of the “fair tax,” which would be a tax on our consumption, rather than a tax on our productivity.”

Yet, that view contradicts Huckabee’s past statements critical of Republican support for regressive taxes.

“One of my complaints with Republicans in my own party is that, true or not, we’re perceived as the people whose tax policies do tilt toward the people at the top end of the economic scale, with disregard to the people who are barely making it,” Huckabee said in 2006[3], according to the Washington Examiner. “And I think it’s in many ways a legitimate criticism.”

Most economists believe that consumption taxes, such as a sales tax, disproportionately affect the poor and working classes. The left-leaning blog Think Progress has pointed [4]out that “Huckabee signed a 1996 sales tax hike, opposed efforts to reduce grocery taxes, and allowed a sales tax increase to become law in 2004.”

When asked about his record of raising taxes, Huckabee also took the opportunity to levy a fresh round of attacks on the Club for Growth, who he dubbed “the people who hate my guts.” In 2007, the national network of limited government and free market advocates published a detailed white paper[5] on Huckabee’s tax record.

“Club for Growth, there’s an organization that loves me,” Huckabee said sarcastically. “If you hear everything they have to say, you’ll have the most absolutely nuanced and inaccurate depiction of my record that you’ll ever be able to find.”

A spokesman for the Club for Growth disputed Huckabee’s characterization that the feud is “personal.”

“He often tries to portray his conflict with the Club for Growth as personal, when in fact, it’s only ever been about his terrible record on taxes and spending,” Club for Growth spokesman Doug Sachtleben told CalWatchdog.com. “While Tax Hike Mike was governor of Arkansas, the overall tax burden in the state rose by 47 percent and the net tax hike was $505 million.”

Huckabee’s record as governor of Arkansas has been heavily criticized by fiscal conservatives.

“During his two-term tenure, spending increased by more than 65 percent — at three times the rate of inflation,” Michael D. Tanner, the director of health and welfare studies at the Cato Institute, wrote in December 2007[6]. “The number of government workers increased by 20 percent, and the state’s debt services increased by nearly $1 billion. Huckabee financed his spending binge with higher taxes.”

Although he refused to acknowledge his support for tax increases, Huckabee quickly pointed to taxes he’s cut.

“Ninety-four times we cut taxes,” Huckabee said at the CA GOP convention in Anaheim. “We rebuilt our roads. We did many things like cutting the marriage penalty, reducing capital gains taxes. I did that in the headwinds of the most Democratic legislature in America – more Democratic than even California, more Democratic than Massachusetts, Vermont, Maine, Oregon, New Jersey.”

The Club for Growth points out that those tax cuts don’t offset his tax increases.