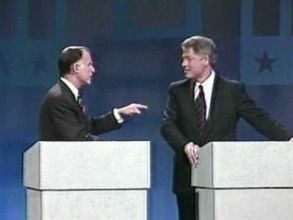 In the hours leading up to the second round of Republican debates on Wednesday at the Reagan library in Simi Valley, the Drudge Report gave prominent play to vague hints[1] of interest in a presidential run dropped by Jerry Brown in a CNN interview. Such a bid seems unlikely for many reasons. But Brown has had a poor relationship with the Clintons for nearly a quarter-century. If the governor of the nation’s largest state wants to stir up speculation in a way that underscores the lack of Democratic enthusiasm for Hillary Clinton’s candidacy, that would be in keeping with his history.

Like clockwork, the national media took the hints. On Friday, Chris Cillizza of the Washington Post, one of the nation’s most influential political reporters, wrote a column [2]entitled “The Case for Jerry Brown.” It’s lead:

Amid the breathless speculation as to whether Vice President Biden will get into the Democratic presidential race[3] — and, if not Biden, then who else? — there’s one name that’s consistently overlooked: Jerry Brown.

Cillizza noted not just Brown’s plausibility as a national candidate but his enmity for the Clintons.

When Brown ran for president in 1992, he stayed in the race all the way through the June California primary — where he lost to Bill Clinton by only seven points. The Clinton team made no secret of their unhappiness about how long Brown lingered.

Then there was the moment in a March 1992 debate where Brown savaged Clinton over his and his wife’s ties to the Rose Law Firm. “He is funneling money to his wife’s law firm for state business,” said Brown[4] of Bill Clinton. “It’s the kind of conflict of interest that’s incompatible with the kind of public servant we expect.” If you think the Clintons — or Brown — has forgotten about that accusation, you don’t understand how politics works.

Here is a link [5]to a minute from the debate. Bill Clinton’s disgust with Brown is apparent. It’s worth a look.

Singling out Arkansas for ridicule

Brown’s low opinion of the Clintons continues to turn up in obscure ways. In a fall 2014 debate with GOP challenger Neel Kashkari, the governor mocked a question about whether California would be able to pay its vast unfunded pension obligations with this potshot: “Are we in Arkansas or Mississippi? This is the eighth-largest economy in the world,” he declared.

Mississippi is the nation’s poorest state. But according to a report [6]based on government data issued by the liberal Center for American Progress, Arkansas isn’t even in the bottom 10 of impoverished states. It’s home to six Fortune 500 corporations, including giant Walmart, and has a more diversified economy than most Southern states, with civilian aircraft its top export and a booming aquaculture industry. Yet Brown jumped at the chance to belittle Bill Clinton’s home state.

Whatever one thinks about the governor’s record, he is entertaining to watch. He understands how politicians and the media interact better than just about anyone. He knows how a feint can prompt a specific reaction. He enters his high-profile interviews with an agenda, than acts on it.

So what Jerry Brown’s next step when asked about a possible last-minute presidential bid?