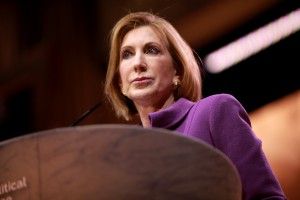 [1]Former Hewlett-Packard CEO Carly Fiorina’s Republican presidential campaign is in the middle of a boomlet, changing impressions left by her failed 2010 California Senate bid and prompting admiring reviews from both national [2]pundits and those here [3]in the Golden State. The belief seems to be building that she would be a strong GOP general election candidate if she can sustain her recent momentum.

But there is even more talk about her as a possible, even probable vice presidential candidate to counter the “war on women” narrative that Democrats are sure to resume using against Republicans in 2016. This is from a TIME magazine analysis [4]Friday:

Is it possible to have a runaway favorite for vice president? If it is, then Carly Fiorina is it.

There’s one factor that would further encourage such speculation that doesn’t get much attention, however. Fiorina no longer lives in California. She’s now a Virginia resident — and it’s arguably as important a swing state as Florida and Ohio. In this 2012 NPR story[5] about the heavy attention that President Obama and Mitt Romney were paying Virginia, it was labeled the “new Ohio.”

The old arguments about picking running mates based on their ability to bring their home states’ Electoral College votes along aren’t as potent as they used to be. Mitt Romney may have picked Paul Ryan to give him a better chance in Wisconsin, but Barack Obama didn’t pick Joe Biden because he coveted Delaware’s electoral votes. John McCain didn’t pick Sarah Palin because he was targeting Alaska. George W. Bush didn’t pick Dick Cheney with the goal of winning Wyoming.

But as part of any cumulative consideration of who would most help Republicans win in 2016, swing-state residency is a plus factor. Fiorina has lived in Virginia since buying a $6.1 million mansion in 2011 in Mason Neck, a rural area by the Potomac River that’s at the far edge of the exurbs of Washington D.C. She’s become a part of the state’s political establishment and was named by then-Republican Gov. Bob McDonnell in 2012 to serve as a trustee [6]on the James Madison University governing board, to the disgust [7]of some Virginia liberals.

But Fiorina might still have attracted interest for the second spot from the GOP nominee for the same reason she’s doing well in a crowded GOP presidential field: She seems better at connecting with voters than most of her much more experienced rivals and can credibly offer herself as a Washington outsider. “Vice presidential selection is much more complicated than focusing on the single factor of home state electoral votes,” writes Joel K. Goldstein, a Saint Louis University law professor who is consider the nation’s leading scholar[8] on the vice presidency.