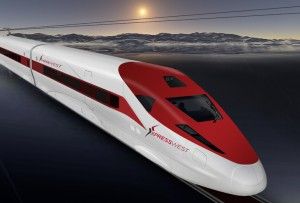 [1]For bemused Californians, there’s another bullet train in town, thanks to the Chinese government.

Formerly known as DesertXpress, the company has labored to send a high-speed track toward Las Vegas since “at least 2007,” reported[3] the Los Angeles Times.

According to Chinese officials cited by the Times, passengers would travel “a 230-mile route with an additional stop in Palmdale and eventual service throughout the Los Angeles area using some of the same track that would be used by the publicly backed California high-speed rail project.” Past plans envisioned a run of 185 miles alongside I-15.

The logic behind the idea drew from some straightforward numbers. “About one-quarter of Las Vegas’s 41 million visitors in 2014 came from Southern California, according to the Las Vegas Convention and Visitors Authority, many via a several hour highway drive,” Quartz noted[4]. Vegas has been without a passenger train since Amtrak shut down its Desert Wind line in 1997.

This  train, which would share track with California’s state-funded high-speed rail, has run into its own version of a problem plaguing that track: reaching Los Angeles proper. “The project has the approval to cover about 190 miles from Las Vegas to the California desert city of Victorville, about 100-mile drive northeast of Los Angeles. It hasn’t broken ground. The project still needs government permission to connect with Southern California’s population centers,” Fox News reported[5].

“The project currently lacks permission to connect with the state of California’s planned high-speed rail project at a station to be built in Palmdale, 50 miles west of Victorville. A mountain range and about 50 more miles separate Palmdale from downtown Los Angeles.”

Skeptics quickly emerged with unflattering questions about the logistical constraints that could be imposed by the train’s pathway and travel times. “Anybody in L.A. keen to drive to Victorville to pay $89 to take an 80 minute ride to Vegas on a high-speed train?” tweeted[6] Bloomberg View’s Adam Minter.

Adding to the speculation, estimates emerged that the train would require far in excess of the $100 million the Chinese have so far made available. “China’s CRRC Corp’s unit along with its peers from China will implement the rail corridor project at an estimated cost of $5 billion,” the Venture Capital Post noted[7].

As yet, American officeholders have remained cagey. Nevada Gov. Brian Sandoval said he hadn’t learned any details about the plans. “But in 2009,” according[8] to the Las Vegas Review Journal, “the XpressWest project drew a key supporter: U.S. Sen Harry Reid, D-Nevada. ‘Senator Reid has been a cheerleader on this project for many years,’ Reid spokeswoman Kristen Orthman said Thursday. ‘He’s glad to see this progress and remains committed to assisting as needed.'”

And the Chinese government appears to have a firm interest in seeing the project to completion. Beijing created CRRC with the specific purpose of throwing the country’s considerable industrial weight around in foreign territories. “The merger of China’s two largest state-owned rail equipment makers has created an industry behemoth, second only to General Electric in size, that will be competing aggressively for projects across Africa, Southeast Asia, and Latin America,” Quartz observed[9]. “China, once a major importer of rail technology, wants to be a world leader in high-speed rail, with projects that span the globe, focusing especially on emerging markets.”

But growth in the U.S. has also been marked as a priority. An employee of the conglomerate told Caixin online that the company “views China Railway International USA an important part of its plan to expand abroad.”