The Monteleone family opened Barone’s Italian Restaurant in Valley Glen 70 years ago, and has seen its share of employee turnover.

One of his cooks was terminated after a few weeks of erratic behavior. The cook, who had been with Barone’s for 25 years, fought back, Monteleone said. The employee retained an attorney, found a doctor to diagnose him with a work-related injury and alleged he had cumulative trauma.

The law permits employees to claim that repetitive stress over a period of time has caused damage and entitles them to cash. 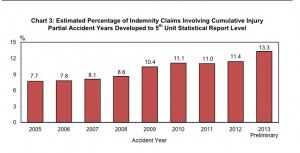 All states permit some form of such claims, but California is widely seen as the most permissive and lucrative in such awards. When the worker comp claims awards increased in 2010, cumulative injury claims were cited as a cause in a report[2] released in January by the Workers’ Compensation Insurance Rating Bureau of California.

One of the primary reasons is a provision of the state code doesn’t allow for a report date for an injury when it considers a cumulative trauma claim. Among the largest increases among cumulative claims is so-called “late reported,” regarding injuries that had not previously been reported.

Therefore, Barone’s fired employee was allowed by a panel of the California Workers’ Compensation Appeals Board to walk away with a five-figure payday from Monteleone.

It was done so at the behest of the state, which gave the worker $25,000. Monteleone had asked that he allow his lawyer to contest the departed employee’s allegations but was refused.

“They don’t even ask me if I want to settle, I don’t get to challenge whatever he says,” Monteleone said. “It’s between the insurance company lawyer and the employee.”

His insurance bill increases to pay a portion of the $25,000 over a three-year period, he figures. Start adding up these claims and it begins to amount to something.

Which is what Monteleone sees happening. A couple years ago, he fired two employees who were stealing from him. Shortly after terminating the employees, he received a notice that both workers were filing a claim, again under the state’s cumulative trauma provision.

“The law is clear and it’s unique to California,”said Dan Pondella, the insurance agent who handles Monteleone’s workers compensation policy. “Anyone can claim cumulative trauma and get paid, even if they worked for years and never said a word. And in this case, even if they get fired for stealing.”

Pondella blames the attorney lobby and state lawmakers for failing to buck the heavy influence and create a better state for employers.

“I would say at least 80 percent of our clients have had cumulative trauma cases,” Pondella said. “Manufacturing firms can move, and they go to Texas where the workman’s compensation insurance is a third of what it is here. Someone like Tom, who is running a family business that has been here for generations, he can’t move so easy. Instead, if he wants to stay in business, he now has to pay that extra amount for the next three years.”

The focus of business advocacy groups like the California Small Business Association as pertains to worker’s compensation is a larger look.

“When it comes to those kind of claims, the employer doesn’t have a leg to stand on,” said Lynn DellaCroce, an agent with HUB International Insurance Services in Santa Maria. She said Monteleone was “damn lucky” to get off for $25,000.

Like other worker’s comp claims, the judge in the case relies on state law, which allows that if 1 percent of your injury can be attributed to employment, your claim, if it satisfies other criteria, is valid.

The state in 1994[3] enacted reforms that required employers to establish a procedure to chronicle potential cumulative injuries, which are attributed to repetitive movement.

At the time, proponents of the change claimed it would benefit employers through prevention. Much of the focus then was on carpal tunnel syndrome, which arose as more computer-related work including typing became more common. But loopholes and questionable – – albeit successful — claims have provided dubious benefits employers.

There are 24 worker’s compensation appeals boards around the state, where claims are heard. California employers pay out the highest worker’s compensation insurance rates in the U.S., according to a national study[4]. There are numerous reasons to apply for payments, most prevalently from actual on-the-job injuries. Wedged in there are claims for cumulative trauma. California is considered the most liberal in the nation when it comes to handing these awards out, with a ready base of lawyers and doctors set up to establish the malady.

“It’s a law that penalizes the employer when, if I had been advised that there were problems that someone was having, I could have done something about it,” Monteleone said. “But the state just goes along with whatever is alleged.”