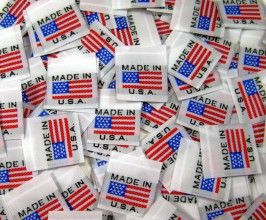 [1]Known for his propensity to veto legislation that strikes him as ill-conceived, Gov. Jerry Brown surprised some observers by signing a bill critics describe as authorizing an outright lie.

Supporters said the new law, passed as Senate Bill 633, merely loosens the legal standards in-state manufacturers must adhere to when presenting their goods as American-made. With Brown’s signature, “makers of California goods can use ‘Made in U.S.A.’ if at least 95 percent of the parts are manufactured domestically,” the Sacramento Business Journal noted[2]. “The threshold approved Tuesday replaces a 1961 state law,” which the bill’s author, state Sen. Jerry Hill, D-San Mateo, said “was approved in a pre-globalization era to protect American producers from foreign competitors with misleading labeling.”

The new standards kick in on the first of next year. In addition to the 95 percent rule, they also allow American-made labeling if “all of the articles, units, or parts of the merchandise obtained from outside the United States cannot be produced or obtained in the U.S., and all such articles, units, or parts constitute up to, but no more than, 10 percent of the final wholesale value of the manufactured product,” the National Law Review reported[3].

In justifying the change, Hill and Brown have had the rest of America on their side. “Country-wide, companies are allowed to fib about their products because the FTC doesn’t require them to elaborate on exactly what percentage of each product was made in America,” according[4] to IJ Review. “So, something that is, at least in part, made in China, can still be labeled as being manufactured in this country.”

In fact, the Review observed, “California was the one state in the union that demanded stricter regulations for their manufacturers. If a product sold in California claimed to be made in this country, every single component had to meet that standard.”

States have taken advantage of the peculiarity of the federal standard, which seems stringent but offers a substantial loophole. The law mandates that “‘all or virtually all’ of a product’s parts be manufactured domestically and that its final assembly must occur within the U.S.,” the Business Journal reported. “The federal government does not specify how much must come from the U.S.; products are evaluated case by case.” According to the National Law Review, relevant factors have included “value, the remoteness of foreign content, the proportion of U.S. manufacturing costs, the site of assembly or final processing, and potentially other aspects that would affect consumer understanding of what a U.S.-origin claim means on a particular product.”

So far, opposition to the new law has been muted. “Is it a relatively modest deception reflecting the realities of a global economy? Perhaps. But it’s still a lie, one that favors the interests of business over those of consumers,” wrote David Lazarus of the Los Angeles Times. “Manufacturers have been given a green light to lie to people,” he added. “There’s no other way to put it.” But a significant set of products that are otherwise entirely American-made require parts that are only available overseas, he conceded.

In fact, Hill was moved to craft SB633 after hearing from one young Californian businessman frustrated with the consequences of limited foreign sourcing. About five years ago, then-17-year-old Dylan Sievers started Bulldog Lighting, an automotive LED fixture provider. “Although Sievers opted to keep as much of the production stateside, he eventually discovered not all of the product could be produced in America,” the San Mateo Daily Journal reported[5]. “Disappointed that he couldn’t market his lights as ‘Made in the USA,’ Sievers contacted Hill.”

Hill told the Daily Journal Sievers “was proud to be an American and proud that his product came from the United States. But because he could not get this one little piece that was made in China anywhere in the U.S., he couldn’t, in California, say this was ‘Made in the USA.’ And that I felt was wrong.”